You wouldn't believe what a crazy day yesterday was in the Kindergarten at one of my schools.  First, there was a little boy who asked if the SRO worked at our school, then he wanted to know how he got his job.  (I guess he's thinking he could do the job!)
This afternoon, I went onto the playground to talk to the Kindergarten teachers.  I look up at a piece of playground equipment, and it takes me a few seconds to realize what I'm seeing. It appears to be a little girl sitting on what is kind of like a "bridge", with a stream of water under her.  I then say, "Is that girl peeing?" to which I get a teacher-in-stereo response, "Why, yes she is."  No excitement, just a matter-of-fact statement.  Both of the teachers said the exact same thing, at the exact same time.  This little girl peed and peed, and I was amused by the kids' reactions around her.  About that time, a little girl holds her hand out into the pee.  That did get a reaction from the teachers!
A little while later, I went down to the Kindergarten rooms to get another child, and I saw the SRO in one of the rooms.  I asked him if he told the little boy how he got his job, and he started laughing and told me no.  I looked over to the boy, just in time to see him put his glue stick in his mouth.
I had a student in my room, and he was getting a little concerned that it was getting close to time to leave.  I told him that I would make sure he got to his room in time, and that he had about an hour before he had to leave.  He just looked at me and said, "That's creepy."
Just another day in paradise!

On another note:  The SRO at this school is the one that I mentioned about a year ago that had leukemia.  He was able to come back to school about a month or so ago.  He looks great, and appears to be doing well.

Here's a picture of a view from my new school: 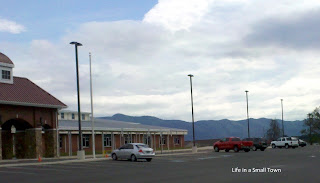 It has a gorgeous setting!  I'll have to go out on the playground sometime and take a picture from there.  Really nice.
Wednesday, Mr. Principal got dressed up: 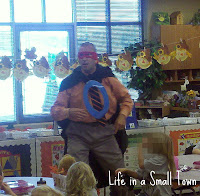 I honestly don't know what it was all about, but he went busting into the classrooms.  This morning he's getting blasted with silly string by the students & faculty.  I think that is for the library meeting their fund-raising goal from the book fair.
Email ThisBlogThis!Share to TwitterShare to FacebookShare to Pinterest