As I was driving between schools on Friday, I noticed a weird haze going on.  The fall colors are at their peak, and I was expecting some spectacular views of the mountains.  Here's an example of what I saw: 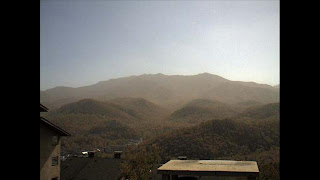 For picture credit, click on picture
Weird, right?  Turns out there was a dust storm in Oklahoma on Thursday, and it managed to reach us on Friday.  So, if you live in Ok., thanks, but no thanks.  You can keep the dust to yourself!

Friday night was a great night for a good high school football game.  CH & I went into the big city for Small Town's football game.  Both teams have been known for their defense this year:  Opposing team was averaging 44.3 points and 246 yards rushing per game.  Small Town's average points was around 41.  In 8 games, our defense has given up 68 points, and 42 of those were to Rival HS.  Opposing team has only given up 57 points.  It looked to be a barn-burner.  We led at the half 3-0.  Small Town's team doesn't give up a whole lot yardage with penalties, but the flags were flying Friday night.  Crazy.  Those boys fought for everything they got.  The final score:  30-7.  It's always good when we win and there are no injuries!  I snapped a shot of the Opposing Team's stands with 5 minutes left to play: 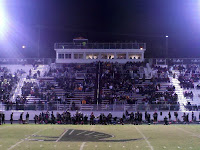 The sad thing is that those people who left missed their touchdown.  Small Town's fans were out in full force.  We completely filled up the visitors' stands...it was a little difficult to find a seat.  These ladies are (and have been for years) at every game, rain or shine, home or away: 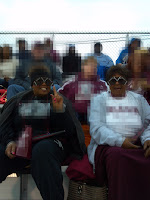 Just in case you couldn't see their glasses: 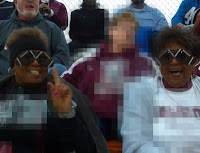 Saturday morning, CH ran some errands and came home with this: 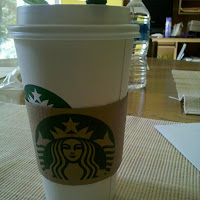 Pumpkin Spice Latte with soy!  My absolute favorite until the gingerbread comes out!

There was a big game at the nearby university on Saturday.  CH's brother came up with a friend and his son to go to it.  I can't believe this was in my driveway: 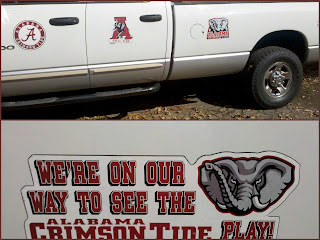 After they left to go to the game, CH & I treated ourselves to this:

There's a great Cuban sandwich shop not far from us.  Their food is amazing.  They just opened another shop on the other end of town, but honestly, the original one is better.  We don't get over there too often, which is probably a good thing!

Saturday evening was YS' last band competition.  I have to admit, it was a little emotional for me.  It wasn't that emotional when OS & MS had their last football game, but then again, I knew it wasn't "over" for me (and isn't that what it's all about?).  This is my favorite picture of OS' last year of football:

That was taken just after Small Town won their 3rd straight State Championship, and OS said that was the moment that he realized it was all over.  LOVE that picture!
MS stayed busy after football season with soccer, so I had soccer games to go to in the spring.  Since he only played his junior & senior year, I didn't get that "into" it.
So, here we are with YS.  The band got straight "1s", and YS also received a "1".  Good way to go out!  After they performed, one of the sophomore trumpets was just bawling.  I looked at YS and asked why the boy was crying, and he said that it was because the seniors are leaving.  He (the boy) just looked over and nodded his head.  Oh. My.  That got me going; I had to walk away.  Talk about a great, close-knit group of kids!  Here's a video of their performance.  Don't feel compelled to watch the whole thing, but they had a fun ending.  If you start at right around 9:05 you should be able to catch all of it.

And...now you know Small Town's real name, if you didn't already!  Honestly, if you wanted to know that badly, you could've figured it out way before now!