Another long weekend is coming to an end.  I have a feeling this is going to be a really long week:  no snow is predicted.
Friday morning our outside table looked like this: 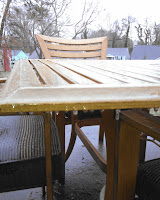 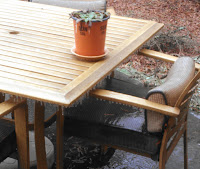 It was pretty icy, to say the least.  It was an extremely good decision on the part of the central office staff to call school off.

Saturday, YS had his first drumline/winterguard competition of the season.  The bad thing was that there were several winterguards who weren't able to attend because of the weather.  Instead of pushing everybody up, there were a lot of breaks.  The drumline's show is titled "Alcatraz".  CH & YS after the performance:

When CH saw some of the members just prior to the performance, he made the comment that the "jail school" was there.  I let him know it was us.  He was a little surprised!
After the performance, we rode down the street to a Firehouse Subs for a quick lunch.  This one had a very nice mural on the wall:

About 5 hours after the drumline performed, the winterguard had their performance: 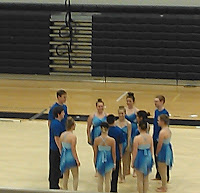 CH & I left after the winterguard performance.  We had a quiet evening of laundry and watching tv.  Shortly after YS came in, some of his friends came to the house for a D&D session.

Sunday was a lazy day:  Finishing up laundry, light cleaning around the house, some flute-practicing, and a quick trip to Camping World for an adapter.  We saw a couple of things we'd like to have someday, but they aren't necessities right now.

Well, back to the old grind, starting off with a 7:15 meeting.  Yep, it's going to be an awfully long week!

CH shared this clip with me:


Gotta have something to help me start off the week with a smile!
Email ThisBlogThis!Share to TwitterShare to FacebookShare to Pinterest