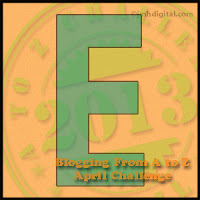 The Small Town has felt a few earthquakes.  As I was trying to find out exactly when the first one (that I remember) happened, I discovered that our county's historical earthquake activity is above the state average, but below the national average.  2 really stick out in my mind, mostly because of their intensity.
The first one I remember feeling was when I was in 5th grade.  It happened in the middle of the night, and was intense enough (4.6) to cause some minor structural damage to buildings.  I remember waking up, and my parents telling all of us (there were 7 or 8 of us still home) that it was an earthquake, and to go back to bed.  I had to look outside to see if any cars were overturned, or if there were cracks in the roads.  The only experience I had with earthquakes were what I had seen on tv.  Of course everything was okay, so I eventually ended up going back to sleep.  My parents said that when they went through the house and checked on all of us, 2 of my older sisters were hugging each other.
As you can imagine, the earthquake was the talk of the school.  I kept expecting aftershocks, but I don't think we had any of any significance.  (Again with the tv experiences!)
The other one I remember was just a few years ago.  I was standing in our kitchen, and heard something that sounded like a big truck coming down the road.  Pepper (my Jack Russell Mix) stopped and looked at me, and that was when I felt it.  Man, that was a weird feeling!
So...are used to earthquakes?  Have you ever had the experience of feeling one?
Email ThisBlogThis!Share to TwitterShare to FacebookShare to Pinterest
Labels: A-To-Z