It was a nice, long weekend.  Thursday evening, CH & I took Laika & Pepper to a nearby dog park.  It was Pepper's first time, and I was a bit apprehensive about how well she would get along with the other dogs.  They had a separate place for the smaller dogs, but CH wanted to see how she would do with the others first.  I shouldn't have worried.  At first she would run around and then come back to me.  Then, she ventured out and sought out dogs to run with.  It really was quite a sight:  There were pit bulls, labs, great danes, a husky, and a rottweiler all running round chasing each other.  At one point, one of the owners gave one of the dogs a stick.  I was a bit concerned, but the dogs were hilarous:  One would get it, and sometimes there would be 3 dogs with their mouths on it, all pulling it, until one got it away from the others and they would all chase the one who had the stick.  There was no growling while this game was going on...at all. 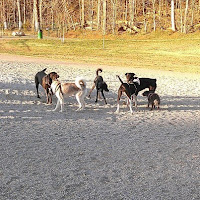 (Pepper is the little one, and Laika has her rear to the camera.)
I had been looking for some kind of tree to display my Royal Copenhagen Eggs.  I found one at Big Lots (after looking all over for something to use!).

Friday was a day off (and my birthday), so I took it easy.  Real easy!  I had a couple of cups of coffee, watched a movie with YS, and didn't get out of my pj's until around 11:00, and got in a nap that afternoon.  For dinner, CH & I met 2 of my sisters & their husbands (1 of which was also celebrating a birthday) and a SIL at the brewery.  Yes, I know it was Good Friday...I had a most excellent Portabella Mushroom Sandwich instead of something with meat in it.  I did, however, accuse our poor server of taking my beer away when I wasn't through with it, only to confide in her that I may have actually finished it but couldn't really remember since I hadn't really eaten anything that day!  (For you non-Catholics, Good Friday is a day of fasting and abstaining from meat.)  One of my sisters gave me a card that was so fitting for having my birthday on Good Friday: 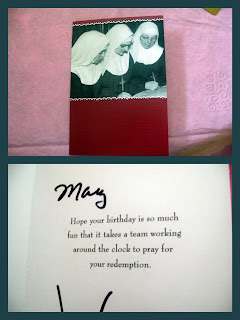 This is what my Google Page looked like on Friday:

I was feeling pretty important!

Saturday was a day of prepping for Easter, which included making the obligatory bunny cakes: 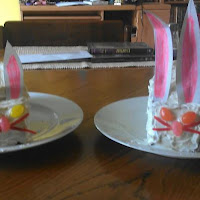 Before I did that, though, I had to go to the grocery store.  On the way, I saw a group of young people walking down a busy street.  As I got closer, I saw a couple of signs, and at the front was a teenage girl carrying a cross.  I really wish I had taken a picture.  It brought tears to my eyes.  I have no idea where they were going; when I was going home from the store, I didn't see them.
Did you hear about making "hard boiled eggs" by baking them in the oven?  I saw it on Patty's FB page, and thought I'd give it a try: 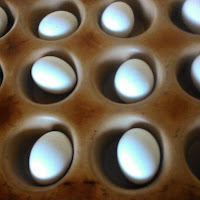 I only had 1 egg that was cracked.  A friend said that she tried it, but used a glass pan, and had 1 that broke.  I don't know if it's best to use a metal pan or not.  It really didn't matter that one cracked since I wasn't going to dye any of them.

After feeling so important on my birthday, this is what  Google had on their page on Easter:

Really???  I was not happy.  Apparently I wasn't the only one, from reports that I read.  You know what?  One of my brothers suggested that I use Bing.  This is what they had on their page:

Much better!
For breakfast I made Sausage and Cheese Crescent Squares.  The recipe says to cut them into small squares, but it's obvious that they've never eaten at my house before.  This is what was left after CH & YS ate: 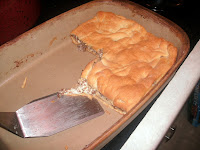 Note to self:  don't forget to add the cheddar next time.  It was still really good, but would've been better if I had remembered it!
We went to 11:00 Mass, which was an adventure all in itself.  Toward the end of Mass, I heard a big "thump".  It sounded like someone had fallen and hit the pew, and that's what it was.  Only it was one of the Altar Servers.  I think he had passed out.  Then, when we were leaving the church, we heard some glass breaking.  There was a big glass bowl with Holy Water on a marble stand.  Evidently someone bumped it and it fell.
The Easter Bunny came for MS & YS (I put a package in the mail for OS earlier in the week.): 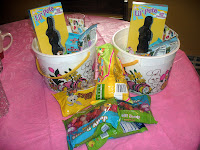 My parents came over for Easter Dinner: 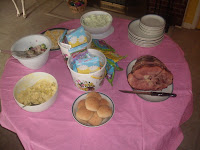 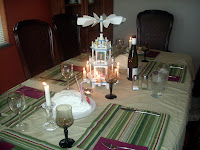 Although Easters are a lot quieter now than they were when the boys were younger, it was a nice day!  We ended the day watching "Call the Midwives", then CH turned it to "The Walking Dead" while I watched "Mr. Selfridge".  And, to top it off, Baylor's women got beat by Louisville!  (If you're a Baylor fan:  sorry!)  All in all...a good day!
My favorite FB post from the weekend: 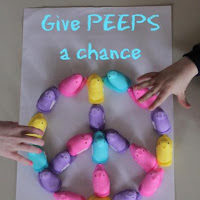