If you're looking for the A to Z Challenge, click here.

Friday was Prom Night.  Small Town High School has a "Senior Only" Prom.  It is a tradition for the prom-goers to gather in the park for pictures.  As we drove down to the park, I was amazed at how many people were there.

After YS' group got there, we took a lot of pictures.  There were serious pictures: 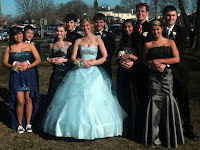 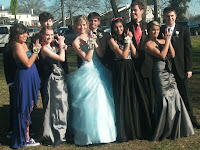 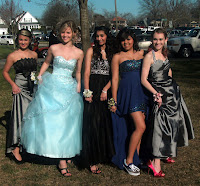 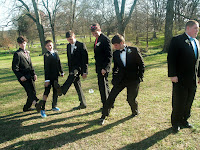 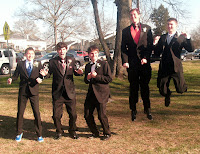 And just all around, goofy pictures: 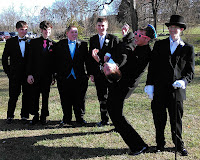 This is such a good group of kids.  They went to Olive Garden to eat, then went to Prom, then went bowling.  Yes, bowling.  After that, they went to IHop, and then came home.  Some of the kids in the group had to be at the high school the next morning at 8:00 to go to a Winter Guard Competition in NC.

While YS was out having fun, CH & I went got pizza, then went to PetSmart, a shoe store, and Dicks.  Then we went home and just kicked around.

Saturday morning, CH & I took Pepper & Laika to the dog park so they could run around and play for a while.  While we were there, we heard the funniest bark I've ever heard:
The lady's reaction is pretty funny, too!

That night, we started watching "Vikings" on the History Channel.  After the 1st episode, I wasn't sure if I was going to like it, but I got hooked pretty quickly.  I got up Sunday morning and watched the last episode (since I fell asleep before it was over!).

I went to Mass, then just spent the day relaxing, and washing clothes.  I may have snuck in a nap, too!    CH & I ate Mexican (our usual) for dinner, and we watched "Call the Midwives", "Mr. Selfridge", and the latest episode of "Vikings" before calling it a night.