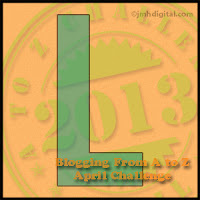 My favorite landmark in the Small Town has to be "the bridge".  It's located next to the swimming pool (which is next to the Duck Pond), down the hill from the high school, across from the Methodist Church, and next to the park. 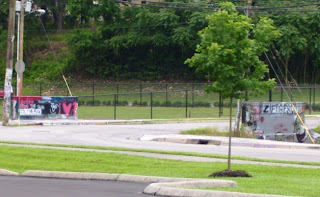 It's not a big bridge, but it is the place of adolescent memories.  The police have no problem with kids painting it, but, as one officer told me:  just don't paint the road.  Yeah, right.  It's said that the only thing holding it up is paint.  That, I believe.

In the past, it was a place to cheer on the various athletic teams or to show pride in your class.  Today, you often can find out whose birthday it is.  If something gets on it that the Small Town officials deem unfit, they will go over it with black paint.  In fact, I noticed that it was all black yesterday.

The bridge is unique to the Small Town.  Our "twin city" doesn't have anything like it, and the Small Town students used to fiercely defend it during Rival Week.  (I'll get into that more when we get to "R"!)  In my time, almost every student had painted the bridge at least once.

OS asked his high school girlfriend to the prom by painting the bridge.  When my oldest sister was in high school, they announced a friends' mother's pregnancy on the bridge.  I'm not sure exactly what they said, but it did prompt a visit from the police to our front door!  She and her friends had to go down and repaint the bridge.

For my 10 year reunion, several of us went down to the bridge to paint it.  When we got there, there were a couple of kids painting it.  One of the guys talked them into letting us have one side of it, so we were able to paint it.  One of the guys in my class said that it was the first time he painted the bridge.  Better late than never!
Email ThisBlogThis!Share to TwitterShare to FacebookShare to Pinterest
Labels: A-To-Z