Don't get too excited:  I only went into 4 churches this trip.  I've already talked about 2:  The Church of Our Lady, which I talked about here, and the Catholic Church that I talked about last post.
There is one church that is on Strøget.  When we were there 4 years ago, every time we went by it was closed.  This trip, the first time we went by the church, it was closed.  The next time:  same thing.  They say "Third time's the charm", and it certainly was!  We were walking when it started to rain, and we just happened to be right in front of The Church of the Holy Ghost.
As we walked into the courtyard, there is "The Tomb of the Unknown Concentration Camp Prisoner".  On the last trip, I know we walked into that courtyard; I don't know how we missed this. 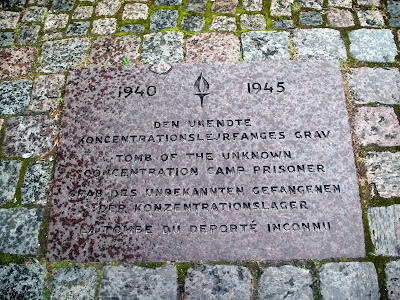 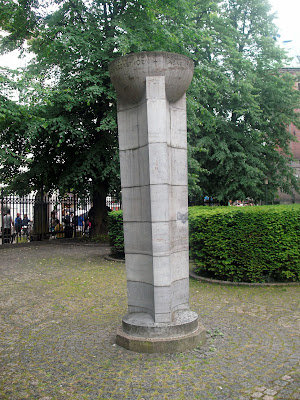 When we made it inside the Church, as B said, "It was very much worth the wait".  Originally, the church was part of a monastery by the same name, dating back to 1296.  The monastery was dissolved in 1536 during the Reformation, but the church survived.  As it seems most of the bigger cities in Europe have experienced, Copenhagen also had a "Great Fire".  Theirs was in 1728, and it destroyed the church.  4 years later, it reopened.
King Christian VI presented the altar in 1732, upon the re-opening of the church after the fire.  According to the pamphlet we got in the church, "The altarpiece depicts the Ascension of Christ and is the work of Hendrik Krock.  The medallion portrait is of King Frederik IV and bears the monogram and palms of his son, King Christian VI.  The final addition to the altarpiece was made by King Frederik V in 1747 with the presentation of the two allegorical figures, 'Faith' and 'Hope', crated by the sculptor Just Wiedewelt."
click on the pictures for bigger, better views! 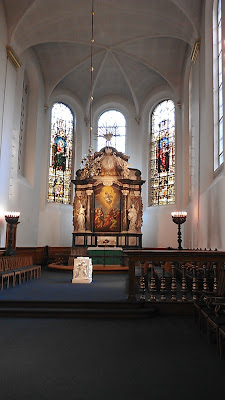 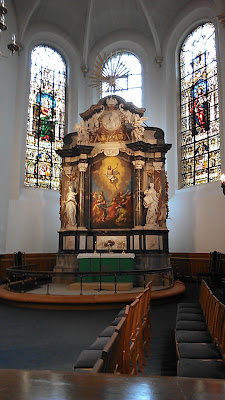 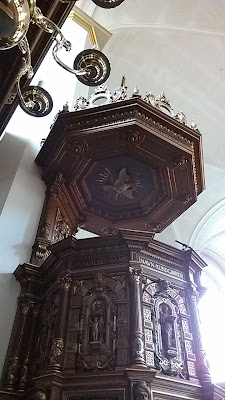 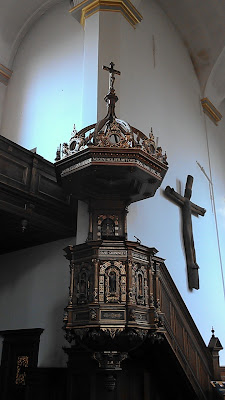 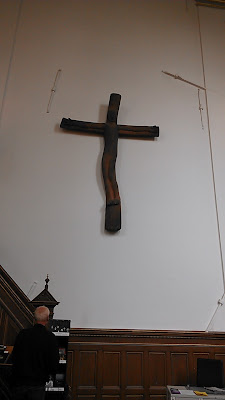 According to the pamphlet, "The organ was designed by Hermann Storck in 1879 to harmonise with the rest of the church interior.  The organ mechanism has been rebuilt on a number of occasions, the most radical and successful reconstruction being undertaken by the firm Marcussen & Son in 1986.  With its characteristic 'romantic, symphonic' tone, the organ is also one of the largest in Denmark with 75 stops (and nearly 5,000 pipes)." 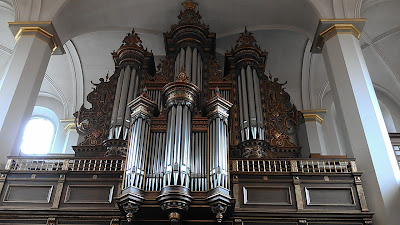 Just under the organ's pipes, is painting depicting the Annunciation of Mary.  It has a wood base and dates from 1897. 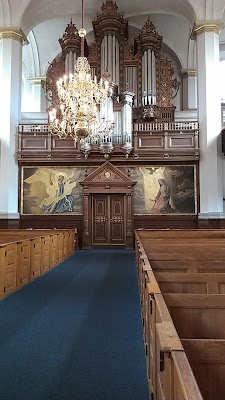 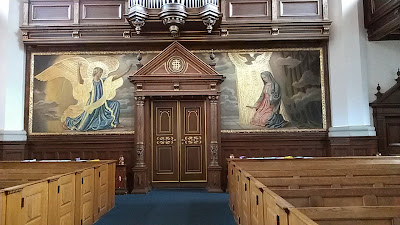 The font (which you can see in the bottom left corner) is white marble.  It was sculpted in Rome in 1827.  The sculptor intended for it to be a gift to his native Iceland, but it was sold to an English Nobleman.  It ended up in an auction in London in 1938, and the owner donated it to the church.
The chandelier "dates from around 1608 and was presented to the church in 1750."  It has a built in clock, and "is surmounted with a pelican.  The pelican is an ancient Christian symbol-the mother bird which gives of its blood so that its young may survive." 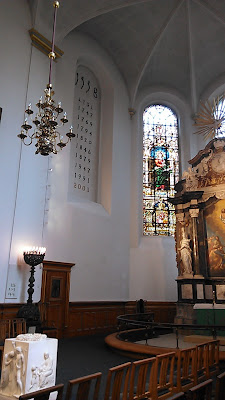 The other church we went into was Gustaf Church, which is part of the Church of Sweden Abroad. 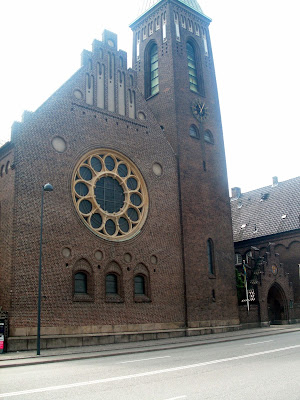 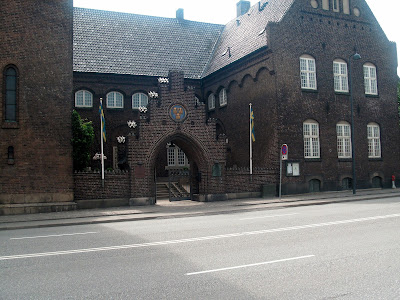 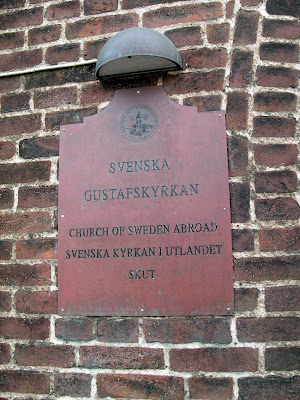 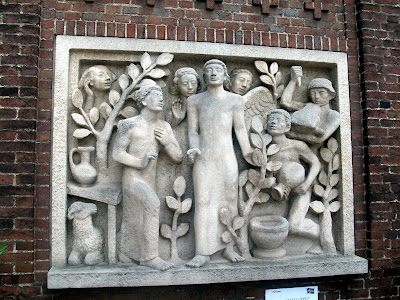 I couldn't find anything on the internet to help me out with any of the history of the church, other than it was dedicated in 1911.  So, according to Danish standards, it's a fairly new church.  The inside: 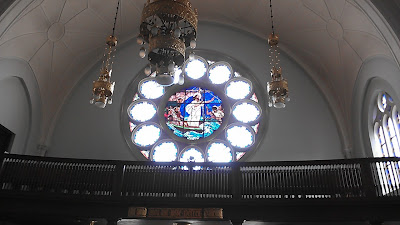 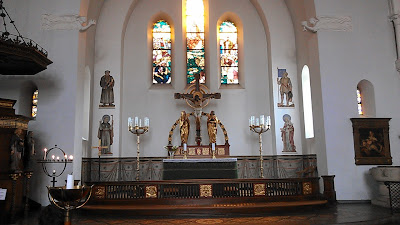 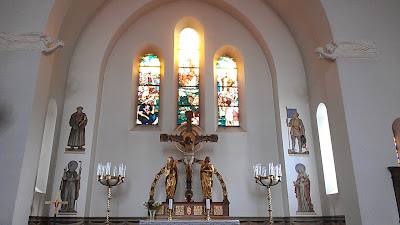 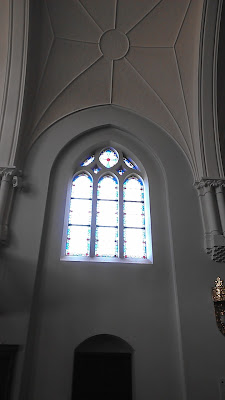 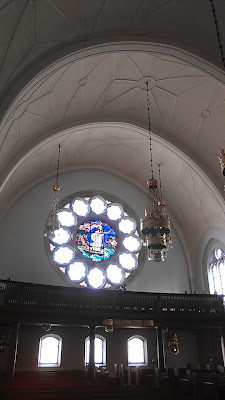 It was a pretty church, but after seeing the outside, it was just a tad bit disappointing.  I think it may have been because the architecture was definitely different from the older churches.

Tomorrow's Wednesday, so you know what that means:  The Hodgepodge!  I should be able to finish our week in Copenhagen up on Thursday!