I apologize for the last post being so long.  I had no idea it was going to take as long to read as it did!  I love Copenhagen and wanted to share everything on here; I had a hard time trying to decide what pictures to leave out!

On Sunday morning, B & H went to Mass with me.  It was H's first time; I'm not sure about B.  I didn't take any pictures of the Catholic Church that we went to since it was very small, and very modest.  This was the first Mass I've ever gone to that wasn't English.  The good thing about being Catholic is that you can go anywhere in the world, and the Mass is the same.  That being said, once I oriented myself to where we were in the order of the Mass, I was able to figure things out!  I almost fell asleep during the Homily, since I couldn't understand what was being said, and I never really slept well on the whole trip.  I asked H & B how it was and if it was boring, and H said it was "okay".  She's so sweet, she wouldn't say anything bad about it even if it was!  After Mass, I met the priest, and he asked if I was American.  I told him I was, and he invited us for coffee.  No one talked to us while we sat and had a cup in the fellowship hall, but H said that after the priest came by and asked where I was from, she could hear several whispers from people saying "She's from Tennessee!"  (I'm sure they were thinking "Jack Daniels" since that's about the only thing people in other countries seem to know about my state!)  When we got to the church, H pointed out the building across the street, and I did take a picture of it as we left:
(Click on the pictures for larger, better views!) 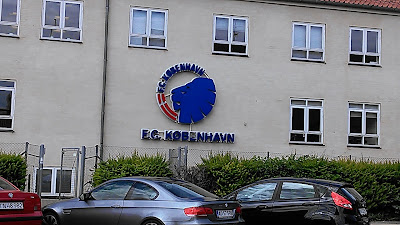 (Just in case you're not up on your soccer, that's the Professional Football Club in Copenhagen.)

We went to "Den Blå Planet" (The Blue Planet), which is the Danish National Aquarium.  The building itself is very "chic": 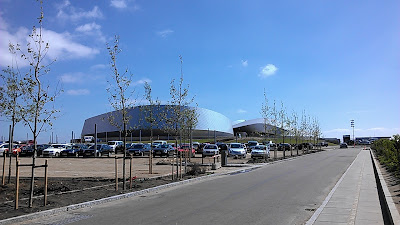 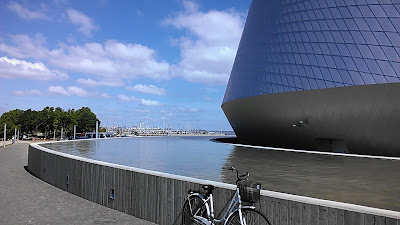 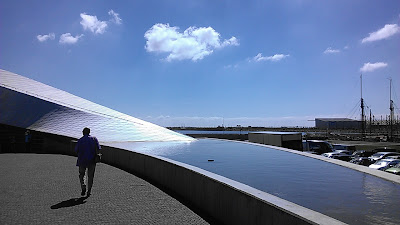 The displays were gorgeous: 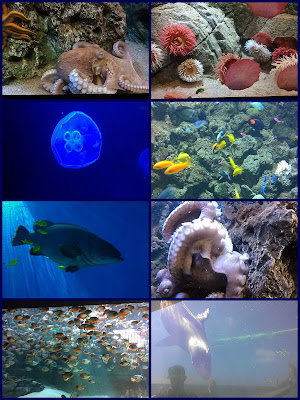 There is an aquarium in Gatlinburg that is pretty good.  The boys said they thought this one was better, though.  The view from the outside was better than the one in Gatlinburg: 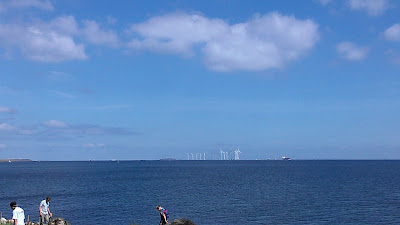 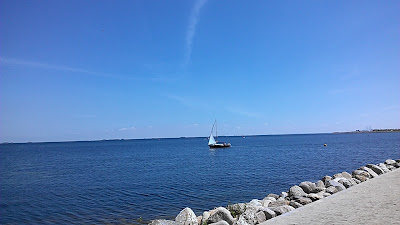 To keep the boys occupied, we tried out "Experimentarium".  It was a "hands-on" type of place.  There were several school groups there, so it was quite crowded.  And, it was a warm day (no air conditioning...or it felt like it anyway).  The boys found something to occupy themselves for a few minutes: 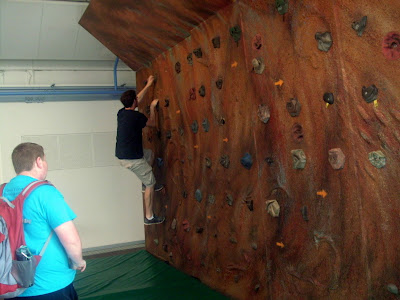 Since boys will be boys, I think they had some kind of competition to see who could go the whole length of the wall without falling off.  At least it seemed like that was what they did.  There were different sections in the building:  recycling, dinosaurs, inventions, etc.  This was one thing I found interesting: 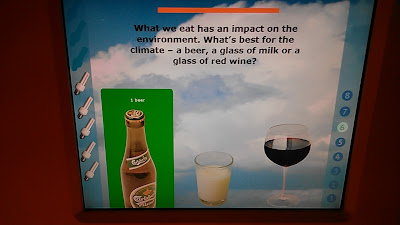 Here is H trying out the windmills (and getting cool in the meantime!): 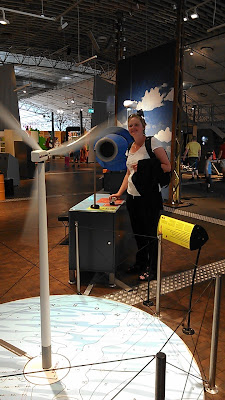 As we were walking from the train to Experimentarium, we passed this: 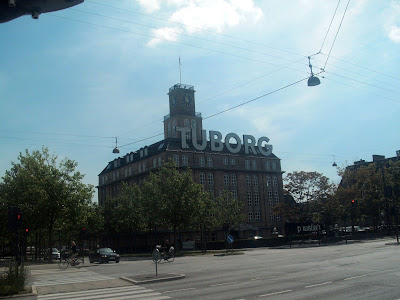 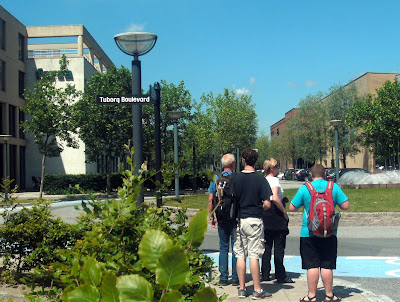 Unfortunately, no tours and no "free" beer.
We also saw signs for a memorial park.  We decided to take a different route going back to the train so we could see it.  I'm so glad we did. 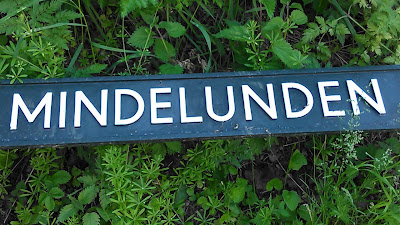 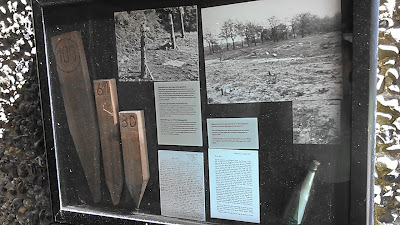 It is a very peaceful place now, where wildflowers grow, and the grass is exceptionally green.  It seemed so surreal to think that the place that was so quiet and peaceful saw such horror. 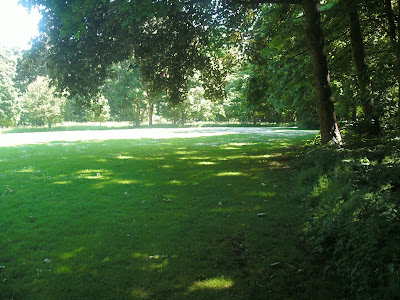 When you walk into the park, to the left is a wall of 151 names of people who disappeared trying to escape to Sweden.  Their remains were never found. 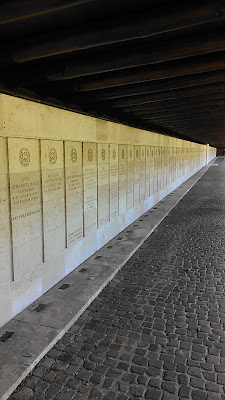 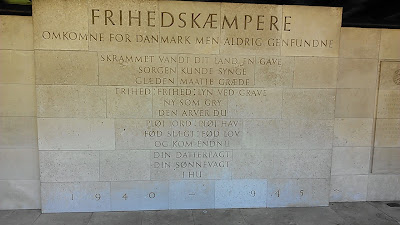 In front of this wall, there is this beautiful place to sit and reflect. 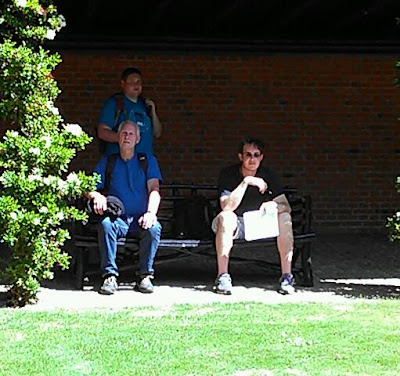 (YS & his great-uncle, with YS' friend behind him.) 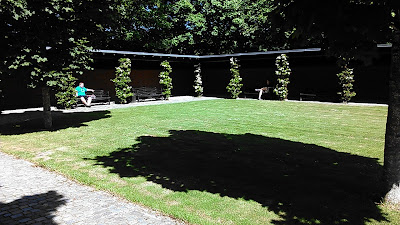 I don't think the boys realize the importance of those names on the wall.  There were some people who weren't much older than they are, who fought for their lives for Denmark.
In the back of the park, there is an execution range with 3 poles.  The poles have been bronzed; the original poles are in the Danish Resistance Museum.  (We went to that museum on our last visit and hoped to go again.  Unfortunately, there had been a fire in the museum in April, and it wasn't open yet.  All of the exhibits in the museum escaped devastation.)  This is where the victims were bound before being shot.  I actually placed my hand on them, and I could feel the anguish and the torture, even though they weren't the "real thing". 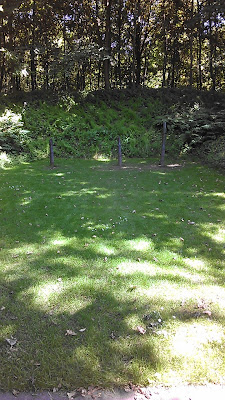 Plaque in the ground at the entrance of this execution field.
"Here we remember Danish men and women who gave their lives in battle against the enemy during the German occupation of Denmark" 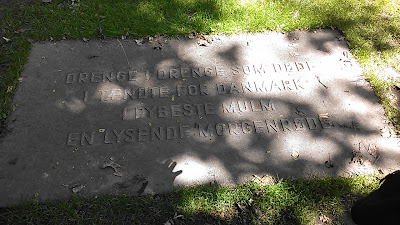 A mass grave was found on the site, and those that could be identified were put to rest in graves: 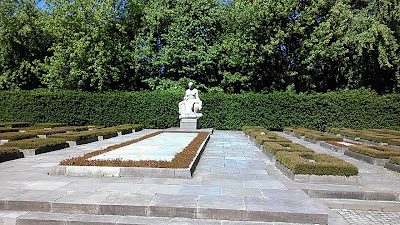 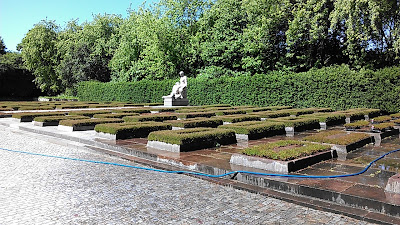 B & H said that a couple of famous Resistance Fighters are resting here; she was able to find their graves.
To the left of the cemetary is another cemetary.  31 victims who died in German Concentration Camps were buried around this memorial plaque. 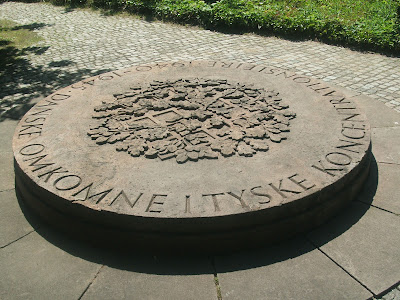 As we were walking through the park, I mentioned to B & H that it just didn't seem fair that while people in Europe were losing their lives and living in such fear, people in the U.S.A. were pretty much going about their own normal lives.  It's even more amazing to think that all of that happened in B's and my parents' lifetime. Talking about putting things in perspective.  I guess there are a lot of things in life that aren't fair.

Thank you to Google Translate for the translations of the plaques!  It's a wonderful thing!
Email ThisBlogThis!Share to TwitterShare to FacebookShare to Pinterest