After we left Eisenach and were on our way to Kölleda for the homestay, we visited Buchenwald for a couple of hours. 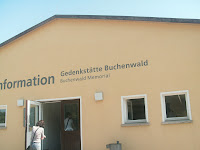 When we first got there, we sat in an air conditioned auditorium with very nice, comfortable chairs to watch a film on the camp.  I did my very best to stay awake, but they made it way too comfortable in there, and I hadn't had just a whole lot of sleep during the trip.  Yes, I did the unthinkable:  I fell asleep.  I really, really  wish I could have stayed awake.
After the movie, we toured the camp.  MS said that words just can't describe the camp...you could just feel that something bad had happened there.  He was right.  The clock at the main gate is stuck on 3:15...the time that the camp was liberated. The front gate says "Jedem das Seine" or "To each his own".  To the left of the gate is the "parade grounds", where roll call was done. 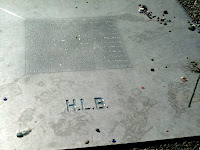 To the right of the gate, if you follow along the fence, is a side gate: 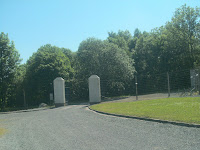 And, as you continue walking down the sidewalk, the crematorium. 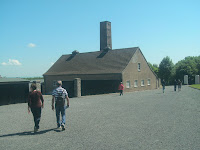 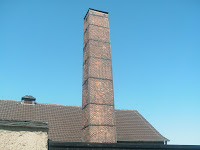 When I walked in the that building, nothing could have prepared me for what I smelled.  You could still smell the smoke.  Horrific. 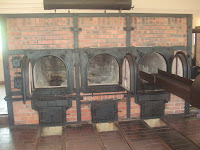 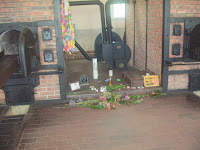 Buchenwald wasn't "technically" an extermination camp.  It was an experimentation camp, in which experiments were done on healthy prisoners.  These included the effects of the spotted fever (typhus) vaccines, poison, and incendiary bombs.  In the "infirmary", prisoners were to stand with their backs against the wall to be "measured". 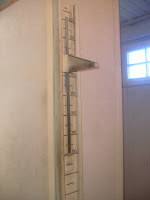 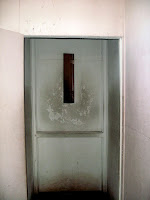 A soldier would put his gun through the hole, and shoot when given the order.  This way, the soldier didn't have to look at who it was he was shooting.  A radio blaring full blast hid the sounds of the gun.

And then there was the "autopsy" room, where the prisoners' gold fillings were extracted, and the skin was peeled off to make lampshades for the SS officers who ran the camp.  I ran across a blog (http://experimentaltheology.blogspot.com/2008/06/ovens-at-buchenwald.html) that described it much better than I could ever hope to:

It is difficult to describe your feelings standing in front of those ovens or looking at the cold tile tables fitted with drains in the autopsy room. The evil and horror and terrible sadness overwhelm you. 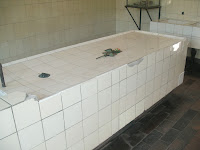 I didn't see or hear about the zoo when we were there, but apparently there was one there with just a few animals.  It was just on the other side of this fence: 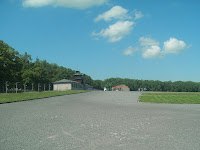 The prisoners could see the SS with their families enjoying a day at the zoo.  The zoo was also in sight of the crematorium.

The Hygiene Institute of the Armed SS.  In other words, this is the building where the "experiments" took place: 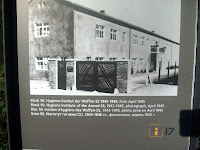 This is all that is left of the building: 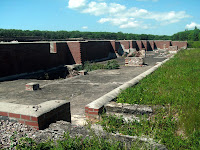 Many of the spots where the barracks stood have memorial stones: 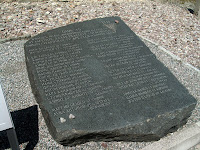 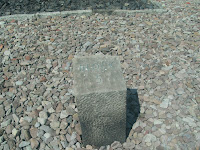 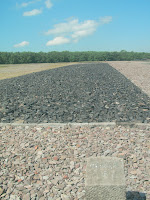 There was a large tree in the camp, just beside the laundry building, which was in front of the storage building.  The storage building is now the museum, and the tree (called "Goethe Oak") is now reduced to a stump.  I walked near it, but didn't walk by it...I didn't know to look for it.  This is not my picture (click for credit).

Apparently, when the camp was being built, trees were being cut down to make room for buildings.  This tree survived only to be hit by a bomb during the war.  The Germans kept the stump there in honor of Goethe, since heis believed to sit under it with Frau von Stein.  This was way before the camp was built (like a hundred years!), when the area was called "Ettersburg".

Looking out over the camp. 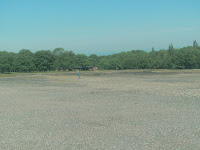 April 11, 1945 at 3:15 p.m., the US Army arrived at Buchenwald.  According to accounts that I've read, on April 8th, some of the prisoners' underground resistance got a transmission out asking for help since they were about to be evacuated.  They received a transmission in reply, telling them to wait because help was on the way.  Following this, the prisoners overtook the guards who hadn't already fled.

In an account of the liberation, Harry J. Herder, Jr. told the story of General Patton visiting Buchenwald, and appearing to be extremely angry when he left after going into the crematorium.  The story goes on to say that he went into Weimar (which is the closest town), woke up the mayor and his wife, and told them to round up every adult citizen in Weimar for a tour around Buchenwald.  The dead, emaciated bodies were left as they were until after the "tour".  When the residents of Weimar were leaving, a couple of them were laughing, which (as you can imagine) didn't sit well with the US Commanders.  So, they ordered that everyone turn around for another tour.  This time was slower, and the residents witnessed the stacked bodies being put on the truck for burial.  This time, when the residents returned to Weimar, they were silent.  This article is kind of long, but well worth the read.  Especially if you're interested in reading a liberator's account.  It's called Liberation of Buchenwald.

Buchenwald is considered to be just under Auschwitz considering the horrors that occurred.  I don't think I'll ever forget the visit.  I did an awful lot of crying and praying while we were there.  It just doesn't make sense how some people could be so evil, and think it's okay.

I didn't get the chance to leisurely walk through the museum that is in the old storehouse since we had a time constraint.  I did take the time to read some of the quotes from the survivors.  Some of them asked, "Why me?  Why was I one of the ones to survive when others died?"  One of the survivors went on to receive the Nobel Peace Prize, there were a couple of men who went on to be Prime Ministers of their country, musicians who played at Carnegie Hall, actors (including Robert Clary who played Corporal Louis LeBeau in Hogan's Heroes), as well as rabbis...and the list could go on and on.

I've shared all of the pictures that I took while we were in the camp with you.  I didn't take any more, because it just didn't feel right to snap pictures when you could feel the prisoners'  presence.  When I was in the crematorium, there were a couple of young men who came in, and were touching the doors and looking in the ovens.  Maybe they were just curious, but it seemed so very disrespectful to me.

These past 2 posts have been extremely hard to write.  It was very emotional surfing for facts to share, and coming across articles such as Liberation of Buchenwald.  I just hope I did it, and the victims, justice.
Email ThisBlogThis!Share to TwitterShare to FacebookShare to Pinterest
Labels: Germany