This is the post that I kept putting off.  I just wanted to do it justice, because it's such a serious subject.

I talked a little bit about Sylvia Gutmann and how the Small Town is connected with her in my Miracles Post.  I'll give you a synopsis here, so you don't have to go back and look at it.

Sylvia is a Holocaust Survivor.  MS' Germany group sponsored the Stolpersteine of her grandparents, and then Sylvia (who lives in the Boston area) made the trip down to the Small Town to talk about her life.  Her parents fled Germany after Kristalnacht, and Sylvia was born in Belgium.  They fled once more after Hitler invaded Belgium; this time to France.  From there, they found a guide to help them get to Spain, but then he refused at having to take the little girls (Sylvia was the youngest of 3 girls).  While her father was in a sanatorium, they heard a knock on the door, and were taken to an internment camp.  Sylvia told us that the night before her mother went to the concentration camp, a nurse told her mother that if, during the roll call, she pushed her girls to the side, she would take care of them and get them to safety.  During roll call, when asked if she had children, she answered that she didn't, and pushed her girls to the side.  The nurse (whom Sylvia ended up finding and meeting much later) took the girls and they eventually made their way to New York to live with an aunt & uncle.  Her parents were murdered in Auschwitz.

That's the gist of Sylvia's background.  The Stolpersteine are "stumbling blocks", or brass plates, in front of houses where a Jew who was murdered or deported lived. There is a cost involved, and research has to be done as proof that he/she lived there.  Some German States have refused to have Stolpersteine, and others have put up plaques in the towns instead.

The official site for the Stolpersteine indicates that they are "An art project that commemorates the victims of National Socialism, keeping alive the memory of all Jews, Roman and Sinti, homosexuals, dissidents, Jehovah's Witnesses and victims of euthanasia who were deported and exterminated."  The artist is Gunter Demnig.  Each Stolperstein begins with:  Here lived...  Each person has their own stone.  Each stone costs €120, or about $160.  A small price to pay to have a victim remembered.

Sylvia's oldest sister's (who took care of her after they were separated from their mother) grandson met us in DC, and stayed with us during the trip.  He had never been to Germany but had wanted to go.  Seeing them together in Berlin, retracing the steps her grandparents made after being rounded up, and being in the house where her parents lived made that leg of the trip that much more special.

The Stolpersteine of Sylvia's Grandparents (sponsored by MS' group):

Sylvia said that when the Stolpersteine were dedicated, an older man told her that her grandparents owned a candy store which he frequented.  He saw her grandparents being escorted down this street. 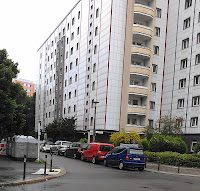 The group in front of the building where her parents lived. 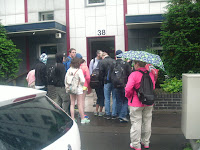 I love to listen to Sylvia speak...even though I always end up with tears rolling down my face.

Sylvia and her great-nephew. 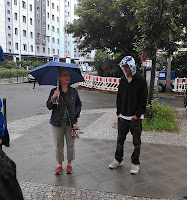 The building where Sylvia's parents lived.

It's the group's tradition to clean the Stolpersteine and leave flowers when they visit.  This year, instead of leaving whole flowers, we left rose petals.  Ken said that when they've left whole flowers, people walking by would pick them up and take them home. 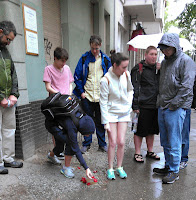 Since the weather was so nasty, we didn't clean these Stolpersteine.  Sylvia was very surprised at the flower petals, though.

The door to her parents' building was open, so we snuck into the lobby!

Sylvia talked about what it was like to go in that building for the first time.  She was able to go into what was their apartment at one time, and walk where her parents lived. 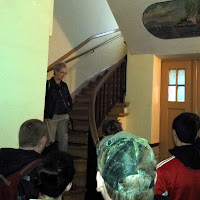 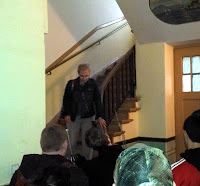 Sylvia and her great-nephew in front of her parents' (and his great-grandparents') building.

The group in front of  her parents' building, standing behind the Stolpersteine. 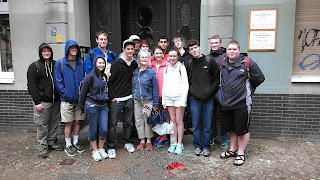 Walking away from her parents' building.  You can see their balcony:  it's the 2nd one (on the 3rd floor).

After we left there, we went to the Memorial for the Murdered Jews of Europe.  Walking through with Sylvia brought a whole different level of emotion and made it that much more personal.  There is a "room" underground called "Place of Information" that holds the names of every known Jew that was murdered during the Holocaust.  We had a major disappointment when we finally found it:  it wasn't open.

You can see the "waves" in the concrete ground:

With the high columns and the uneven ground, it did make me a bit disoriented.  And lonely.  And, to be perfectly honest, just a bit panicked until I found the rest of the group.  Perhaps that's what the architect was trying to achieve.

When we went to the Reichstag (Parliament Building), Sylvia's great-nephew and another student weren't going to be able to go in with us, since they were "late registers" with the group.  Sylvia met us inside, and said that after she talked to one of the employees and told her that her great-nephew was the grandson of a Holocaust Survivor, he and the other student were allowed to join the group.  (Maybe, just maybe, a few tears were involved, too!)  Seeing Sylvia touching the black bands that are placed under the names of those former Parliament members who were persecuted by the Nazis brought the significance home: 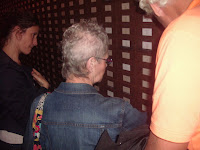 At the end of a very emotional day (we did all of the above in 1 day!), we ended it by going to the Jewish History Museum.  After everything we saw with Sylvia, even though she wasn't with us physically, we could feel her presence, especially in these 2 place in the museum that I discussed in this post:
"The Holocaust Tower"

In Eisenach, we "stumbled upon" more Stolpersteine.  Our last evening there, Ken got some supplies so the kids could do a little polishing of the ones we found.  One of the first ones we found were those of a family:  Parents and 2 young boys.

The Stolpersteine before polishing:

This is what the Stolpersteine looked like after they were polished: 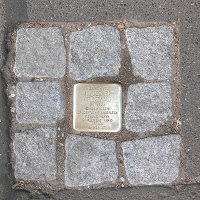 And after the polishing and the petals were placed.  Yes, we "placed" the petals, we didn't toss them or throw them.

Sylvia's great-nephew as he polished a Stolperstein:  (Hopefully one day I'll know what was going through his head as he polished it.  I definitely teared up when he was doing this.) 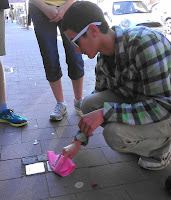 Watching the grandson of a Holocaust Survivor polishing a Stolperstein within 10 km of where the wall once stood was extremely emotional.
The kids working together to polish some:

This was was fairly new, as you can see the orange spray paint around it.  The official site indicated that one had been put in on May 10th.  This could have been it: 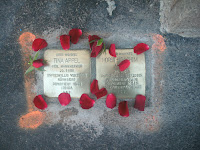 The kids took such great care to make sure the Stolpersteine were perfect before we placed the petals.  I was amazed at how seriously they took it, especially with the ones toward the end.  I don't know how many total we polished, but I read later that there are a little over 70 in Eisenach.  We polished what we found.  I know I found one that was in front of a candy shop, which would've been perfect since Sylvia's grandparents owned a candy shop, but we couldn't find it.
After we polished a couple of Stolpersteine, I looked back as we were walking away and saw this:
A family noticing the Stolpersteine: 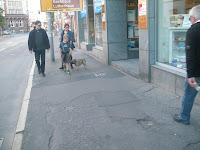 You have to look behind the guy in the forefront to see the couple stopping and looking at the Stolpersteine. 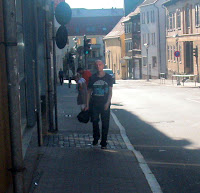 To me, that's what part of polishing the Stolpersteine is about:  bringing awareness to those horrors that occurred in Europe.   I did an awful lot of praying while we were in Berlin & Eisenach.  It is just beyond my wildest imagination what the Europeans went through.  It's not just Jewish History, it's a part of Human History.  The Stolpersteine are just one way to make sure that those horrors are never forgotten.