For the last leg of the trip, we left List auf Sylt and rode a bus to Tønder, Denmark.  Tønder once belonged to Germany.  In fact, the people voted to remain German, but I'm unclear as to why it is Danish.   We were only there for a couple of hours, which is too bad because I just learned of the historical significance of the town:  This is where the Germans marched into Denmark during WWII.  Tønder then became the location of a small concentration camp.  There is a Zeppelin Museum there, since that's where a zeppelin base was in WWI.  The town was officially bilingual until 1945.  Tønder is Denmark's oldest "privileged market town", according to Wikipedia.

Buildings just outside of the church

Market Square- I couldn't find any information about the statue, except that it is called the "Kagmand Statue", and "Kagmand" means "Whipping Post" in Danish. 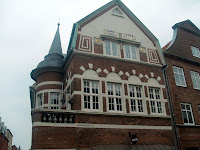 Street in Tønder as we were waiting for the bus. 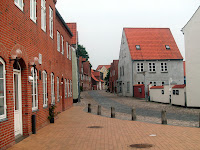 Pedestrian street in Tønder.  The yellow building on the corner was actually a huge store that carried a lot of different things in it from souvenirs to soap. 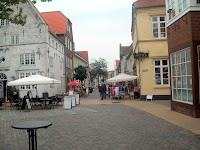 More of the pedestrian street 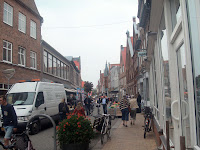 I talked about the church in the second post of churches, which you can find here.

Our last bus ride was to Hamburg.  At some point, I think we got on a train, but I have no idea where we did that!  We got to the hostel (the one where the room smelled like urine...worst room on the whole trip!) and went to eat.  We walked down the river just a bit, and that was all I saw of Hamburg. 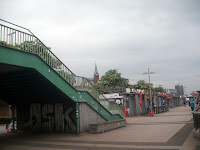 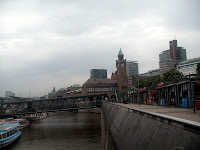 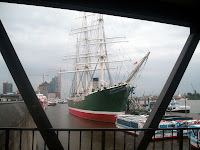 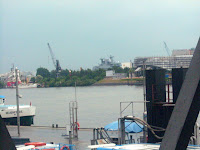 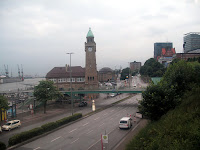 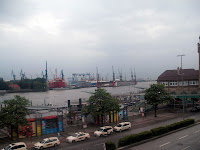 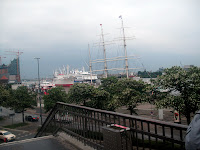 Ken & most of the kids went on a late-night stroll around the city, but I didn't realize that was what he was going to do until it was too late, so I missed out on that.

That was the end of our Germany/Austria adventure.  My impressions of Germany:

~  The Germans as a whole were not very friendly.  They didn't smile much, especially in Berlin and Weimar.  When we were in Kölleda, a lady bought a group of the kids ice cream, which was extremely nice of her to do!

~  I often wondered about the indifference of the German people, especially in Berlin & Weimar, and wonder if it's a "holdover" from the Cold War.  Our guide in the Stasi Museum said that the E. Germans were told that the USA was evil, so I wonder if there's still some of that?

~  When we were in Berlin buying CurryWurst, the employee told me (in German) how much I owed her.  I looked at her and said, "Sorry", and she told me in English (either that or I held out money and she took what she needed).  Another employee (who was an older lady) said something in German followed by, "In Germany" (in English).  I'm sure she was saying something along the lines of me expecting to be talked to in English when I was in Germany.  I just looked at her & smiled, but I really wanted to flip her a bird.  I asked YS about why I couldn't understand the price of something when I knew the numbers, and he said it was because of the way that they said the cost of something, like if something was €29, they would say "9 and 20".  Of course, he did say that reading the sign would've helped me.  Whatever.  It really bothered me that I couldn't understand that.

~  Before I knew that MN was going on the trip, I checked out tripadvisor to see about where to go on my own.  Most of the responses I got on the forum said that most people spoke English, so there shouldn't be a communication problem.  Boy, were they wrong.  A couple of people (including my daddy) said that it wasn't that they didn't know English, they refused to speak it to me.  I think it was just that they weren't going to go out of their way to accommodate us. (see below)

~  As Americans, we are a bit spoiled, and I know that.  We're used to people accommodating us, and that wasn't about to happen over there, especially in the former East Germany.  It was a bit frustrating, but then I would have to remember that we were in Germany, and we should at least attempt to figure out what they're saying.  I got very good at saying, "Ich verstehe nicht" (I don't understand), and then I'd get some sympathy!

~  My next trip to Germany, I would like to take CH to Eisenach, Weimar, and Munich, and definitely spend more time in the Western part of the country.  The part that we saw was wonderful with all of the history and beautiful architecture.

~  When someone asks me how my trip was, after I tell them it was marvelous, I tell them that it was so amazing to be sitting in the former East Germany, to look around, and to think that when I was in high school & college, there was no way I could have ever imagined I would have ever been able to sit where I was sitting.  It was just simply AMAZING.  Since the kids were born after the wall came down, I don't think they realized the impact of being able to move freely around the places where we went.  Hopefully someday they'll realize how amazing it was.

Thank you so much for reading my posts.  Some of you mentioned how touched you were after you read the posts about the Stolpersteine & Buchenwald. I saw things that I could never have imagined that I would ever get to see.  CH was so supportive in letting me be away from home for 3 weeks, even though I'm still getting some teasing about being gone so long when he had to stay here and work!

That concludes my Germany/Austria trip...but I'm not quite done yet!  The day after we got to Hamburg, YS, a friend of his, and I hopped on the ICE to Copenhagen!   And we got there all by ourselves!