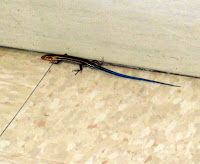 Yep, the little guy is back.  I hadn't seen him in about a week, but he made his presence known yesterday.  It's been pretty chilly here the past few days, so I'm sure he was laying low until it warmed up some.  He sat there for quite a while.  He didn't move at all when I slowly went to my pocketbook, got my camera, and took a picture.  Actually, it was a couple of pictures: I knelt on the floor to get this shot.  I was afraid he was dead.   As I was on my way to the restroom, I told one of the assistants about my visitor and told her that I thought he was dead.  She came in, got close to it, and as she reached down, it started squiggling away.  He started to slide behind the file cabinet, but the assistant trapped his tail between her hand and the wall.  She was able to gently grab his tail and pull him out without pulling off his tail!  She put him outside, and he quickly ran off.  I didn't even think about getting pictures until after she let him go.
Until next time, little guy!

Email ThisBlogThis!Share to TwitterShare to FacebookShare to Pinterest
Labels: school