Wednesday Hodgepodge: Mother May I?

1. Have you ever been served breakfast in bed? Do you enjoy that? If someone were serving you breakfast in bed this coming weekend what would you hope to see on the tray?
When the boys were little, I used to get breakfast in bed for Mother's Day.  Since they've gotten older, they sleep later than I do, so I don't get that anymore.
2. What is one piece of advice you would give a new mother?
Oh, this is the wrong time for me to be giving advice!  If I have to pick something, it would be to be consistent.  In everything you do.  When you say you're going to do something, do it.  And don't budge.

3. When was the last time you wanted to scream? Explain.
You mean, when was the last time I screamed?  Some of the conversations I've had lately have made me want to scream.
4. Can you hula hoop?
I used to be able to, but I don't think I could do it now.
5. What is something people do in traffic that really bothers you?
Tailgate.  Seriously.  I can't go any faster, so getting on my tail isn't going to help things move any faster.
6. What do you do when people don't admit they're wrong?
I usually say "whatever" and let them think that they're right.  The truth will come out eventually!

7. What is the first thing that comes to mind when you hear the word 'fun'?
Beach.
8. Insert your own random thought here.
Last May I found this critter "belly-up" under my desk at school: 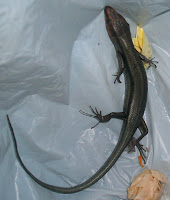 Yesterday, I walked into the room after lunch, and a movement caught my eye.  Yep, you guessed it:  another lizard.  He ran behind the bookcase before I could grab my camera, and stayed back there for a couple of hours.  He finally started to venture out, but ran back in after I made a movement.  Hopefully he'll eat some of the spiders I've found in my room.  (Do they even eat spiders?)  My room is next to the auditorium, away from everything, so it gets forgotten during the cleaning.  I did have a problem with keeping my feet on the floor after I saw him!
Email ThisBlogThis!Share to TwitterShare to FacebookShare to Pinterest
Labels: Wednesday Hodgepodge