~  Today is day one of two for professional development.  These 2 days are counted as "Banking Days" for next year.  On our school calendar, we used to have "Optional PD Days"; the board has changed the name to "Banking Days".  Next year we have 3.  So, we can earn 3 days off by doing 3 days worth of PD during the summer, as long as we have certificates stating that we earned them.

~  MS has been working at the Destination Imagination Global Finals last week and this week.  He's making some good money, which is good since he owes his daddy!

~  CH & I got a good laugh while watching Wheel of Fortune last night:  there were 2 brothers on a team who were from El Salvador.  The puzzle they won:  Red and Green Chili Peppers.  What did they win for solving the puzzle?  A trip to Central America!

~  I love it when CH brings me a surprise, even when I tell him to bring me one.  He went to Wally World last night and asked if I needed/wanted anything.  I couldn't think of anything I wanted, so I told him to bring me a surprise...something he thinks I would like.  Here's what he came back with: 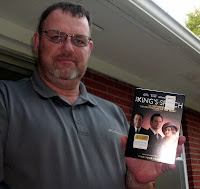 I didn't see it in when it was in the theater, so hopefully it's worth buying it!  It got rave reviews from ASHA (the American Speech Language Hearing Association), so it must be pretty good. 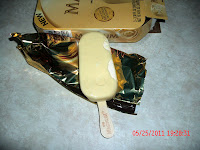 Magnum White Chocolate Bar.  I read on someone's blog (sorry I can't remember whose it was!) that the chocolate ones weren't very good, but I really liked the white chocolate.  A bit pricey compared to other ice cream novelty bars:  there are only 3 to a box.

~  Ally got her stitches out on Tuesday.  The vet tech said that when they were prepping her for surgery a couple of weeks ago, they were putting the junk on her stomach, and the bladder stones were just falling out.   The vet said that when they put her on the operating table, there was a nice little pile of stones laying on the table where she had been.  She said she had never seen anything like it.  Ally seems to be a lot happier; she'll be even happier after next Tues. when she gets to go to the "beauty parlor" to get a hair cut!

What kind of "thangs" are going on in your world today?
Email ThisBlogThis!Share to TwitterShare to FacebookShare to Pinterest
Labels: CH, dogs, laughing, MS, YS