To be perfectly honest, Valentine's Day is really just another day for me.  CH does something special for me, but I honestly think it's over-rated.  (I wrote this last night, and he came into the kitchen as I was putting his present-see below- on a plate.  He said he wasn't planning on doing anything because he knew I didn't like it!)  The restaurants are packed, so we just stay home.  Last year, YS cooked dinner for CH & me, and served us alone in the dining room.  I don't have anything special planned for this evening; we'll probably just have spaghetti for dinner and settle in to watch NCIS.
Every now and then, I'll try to get creative. And, every now and then once in a blue moon, I'll actually get half-way lucky and it will turn out.  (See why I'm having difficulty committing to learning to crochet?)  I usually get the boys Valentine boxers, but last year did something a little different.  That resulted in OS asking where his boxers were.  I didn't think it was any big deal to them, but apparently they like the Valentine's Day tradition.  So, this year I got each of them a pair of boxers and a goodie bag: 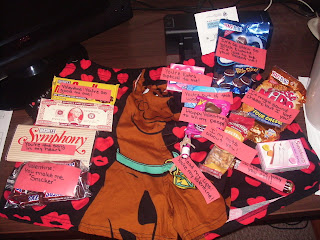 If you look closely on the goodies, you'll see red paper on them with a "line".  For example:  the rolos say "I like the way you roll", and the peanuts say "I'm nuts about you".  I found the idea on Pinterest; it was pinned from Mud Pie Studios.  Each pair of boxers is different; hopefully OS was pleasantly surprised when he went to his mailbox yesterday.  Guess this will make up for the "no stockings" at Christmas!

For CH, I made Cookie Dough Truffles.  After I dipped them and they hardened, I  melted white chocolate chips and put X's and O's on them.  Hopefully he'll realize what they mean!  Here's the finished product (minus the presentation): 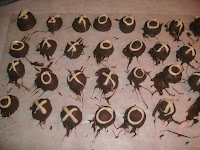 What are your special plans for today?
Email ThisBlogThis!Share to TwitterShare to FacebookShare to Pinterest