I Must be Out of My Mind

Remember when I mentioned that MS had brought home the fraternity's hamster over Christmas break? Weeeell, you're not going to believe what's in our house now: 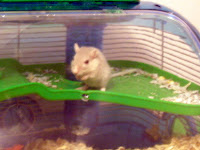 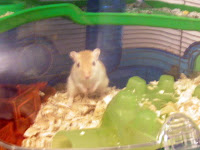 Yes, I can hear you:   "Giiiiiirl!  Have you lost your mind?"  I think the warm winter has definitely gotten to me.  I got a phone call on Sunday from CH & YS, who were at Petsmart.  I'm pretty sure they were originally going to get a hamster, but changed their minds and wanted a couple of gerbils instead.  You know, those little mouse-looking animals with TAILS.  Not the cute little hamsters with no tails.  I said no...I really, really did.  CH gives a really good argument.  He should've been on a debate team.  At one point, the sales guy said to think of them as miniature kangaroos.  Riiiiight.

I told CH to make sure they were both male, and he said that Petsmart only sells males.  We were trying to think of 2 male names that go together, and we came up with Tige & Eli.  CH has a couple of friends (Tige & Eli) who rode with him to Alaska a few years ago.  Tige & Eli live a couple of states away, but they will come in every now and then for a long weekend to do some motorcycle riding in the area.  I have to say, those names seem to be perfect for the gerbils.  I don't know how the human Tige & Eli will feel about having rodents named after them, though!

I got a really good look at them Monday afternoon when no one else was home.  That's when I realized they have red eyes.  I could've handled beady black eyes, but beady red eyes?  I'm just not too sure about that.  I'm just thankful that they didn't come home with an albino gerbil.  That would've truly freaked me out!

CH & YS have plans to get more tubes for them, and to expand their living quarters.  Pepper (my Jack Russell mix) is likely to have a heart attack any day now.  Ally (my Schnauzer) has no clue they're here and couldn't care less.  Pepper reached up and nosed the latch while Eli was at the latch trying to push it open from the inside.  Pepper actually unlatched the cage, but I was right there to latch it back.  It was a conspiracy, I tell ya.

Yep, never a dull moment at our house.
Email ThisBlogThis!Share to TwitterShare to FacebookShare to Pinterest