Another weekend that involved over 100 teenagers.  And it was good, it really was!  Saturday involved some theatrics, spinning, and percussion.  YS was involved in this: 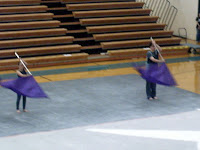 OS came in for the weekend Friday night, but I didn't really see him until Sunday since I was gone on Saturday. We actually had a dinner at home, all together on Sunday evening.  All 5 of us, plus one of CH's motorcycle friends.

Funny thing at the end of Mass:  At the end of Mass, Father will say, "Please bow your head and pray for God's Blessing".  Father said that, but then said, "No, please have a seat", followed by "There are no announcements, you can stand back up...And now we will do Rock, Paper, Scissors!"  If anybody comes to a Mass that he is presiding over and is expecting a perfectly said Mass, they're in for a surprise!  He definitely "makes it real!"

I'm still trying to figure out Lent.  I'm trying to get in the right frame of mind, but I'm having a really hard time with it.  YS is giving up shoes for Lent.  Yes, I said "shoes".    I suggested something like going to Mass every Sunday, but he insists on going through with this.  I have no idea where he came up with idea, but apparently he's something he's thought through.

Let's get this week going so we can get it done!  Only 2 more weeks until we have Spring Break...YS' break starts at the end of this week.
Email ThisBlogThis!Share to TwitterShare to FacebookShare to Pinterest