Saturday started off with one of my sisters (Jeffie) and I going to a nearby town to watch one of our nephews participate in a rowing event.  I have no idea what those races are called!  We learned quite a bit about rowing, such as:  the rowers (or whatever they're called) have their shoes in the boat (or whatever it's called).  After their race, they hoist the boat out of the water and put it back on the trailer, and you'd better be on the lookout because they'll yell, 'heads up'  and then turn their boat whether you're ready or not.  Luckily we didn't get hit!  Jeffie pointed out that usually when we hear "heads up" when we're with my sister "T", we're looking at the sky since her oldest is a pitcher for a minor league team.  My nephew rows with the Va. Tech Rowing Team.  Apparently this was a pretty big event; these are some of the schools that were there: 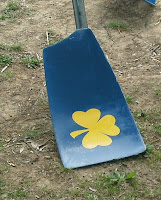 And, of course, the "home boys"  (excuse the quality of the picture!):  Notice the orange and white checkered oars!

Here's a picture of my nephew after the race:  (he's the one in front) 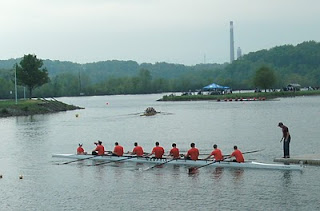 See the smokestacks in the background?  Jeffie said that when there is steam coming out of it, her grandson calls it the "cloud factory"!  Is that not the cutest thing?

If you've been following me since the beginning or have read my "Meatless Friday" posts during Lent, you know that I read "The Little Black Book".  When I went to Mass yesterday, there, on the table, were a lot of little white books.  Here's what they look like: 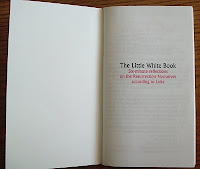 Holy Moly:  There's a "Little White Book" to go along with "The Little Black Book"!  We missed the first 2 weeks, but I guess that's okay.  These books are GREAT.

Yesterday after Mass, the priest read a letter from our Bishop.  There was a man who came forward last week and said that he had been molested in the late '70's by his parish priest.  This happens somewhere else, right?  No way could it happen in a parish where some of my college friends attended.  Wrong.  When you hear things like this, it's always "somewhere else"; in a big city far away from where you are.  I recognized the accused priest's name; some of my college friends (in fact, one of my former roommates) attended Mass at that church.  The priest did, in fact, own up to what he did.  I'm not saying that it makes the situation any better, but you do have to hand it to him for saying that he did it.  Or, maybe it was just that he was caught and he knew it would be stupid to deny it.  The bishop did a fantastic job in explaining things.  He described the incident as a "punch in the gut" to all priests.  He assured the people in the diocese that this is not going to be tolerated.  Requests are being made to the parishioners in all of the parishes in this part of the state to come forward if they have been a victim of abuse.
When you have children, you think that they are safe in church.  You think that you can trust the people in the church to help protect your children.  You expect that when they go on church related  trips that they will be protected from people wanting to hurt your child for their selfish reasons.  How awful it must be  for those children and their families to have to deal with those incidences and the psychological backlash that comes from them.  I have seen it in the schools; you just don't expect it to happen in church.
My diocese has implemented the "VIRTUS" program.  According the diocese website:
"“Protecting God’s Children” is required for parish and school employees and regular volunteers in contact with children or vulnerable adults and is recommended for parents and grandparents. The training is offered free of charge."  Every person who comes in contact with children is required to complete the training.  The program began around 1998.  This won't help those who have been abused prior to that time, but hopefully it will make sure that the abuse will stop. Some people will immediately say that priests should be allowed to marry.  In my opinion, that's not the answer.  You have married ministers, married teachers, married people from all walks of life who are child abusers; not just priests.  I don't know what the answer is, but I think that the Church is learning from past mistakes and doing the best it can to make sure that it doesn't happen in the future.
It is a sad thing that the abuse puts the Catholic Church and priests in a bad light.  For every priest  who abuses a child, there are hundreds of those who would never even dream of doing such a thing.  I've known many wonderful, amazing priests so far in my lifetime, and I've known just a few who I didn't think were that great, but, as far as I know, I have known none who have been abusers.  The only analogy I can think of is likening it to a pit bull.  We always had pits or pit mixes until we got our  schnauzer.  They are the biggest babies in the world.  But, because some people breed them for fighting and make them mean, they all have a bad rap.  I know that's a crazy analogy, but it's the best I've got.  Anyway, today, my heart is hurting for the Church, priests, those that have been abused, and their families.  I have wondered why the man chose now to come forward.  I wonder if it has something to do with April being Child Abuse Awareness Month?  I have never known that April is Awareness Month, so the media must be really talking it up this year.
The message from the Gospel this week:  Do what you do best, just do it in a different way.  The apostles were on their boats fishing, thinking that they needed to go back to "life before Jesus".  They weren't catching anything, then Jesus tells them to try the other side of the boat.  Apparently this wasn't as easy as just pulling in the net and throwing it on the other side:  there was a lot of things that had to be maneuvered in order to get to the other side. Then, after they catch a whole bunch of fish, they bring it to shore, only to find Jesus has fish over a fire, and invites them to breakfast.  Here's what I got out of that:  Obviously, I must do my job pretty well:  I've been in the same occupation for 26 years.  So, I should look at going to work every day as doing it for Him, not myself.  Whatever you are good at, give that up to the Lord.  He's the One who gave you the talent in the first place!

Here are just a couple of pictures I took around the yard yesterday: 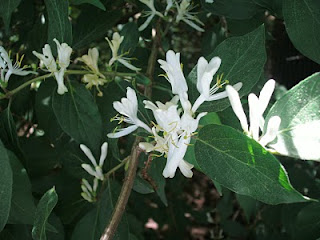 The honeysuckles are starting to bloom!  I love the smell of honeysuckles in the wind!  Growing up, they used to make my mama sneeze! 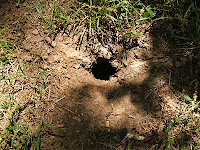 How weird is it that I took a picture of a hole in the ground in my yard?  I have no idea what's in there, but my Jack Russell mutt was sniffing at it like crazy. 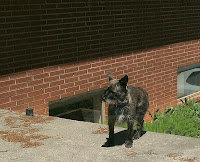 And here's the little stinker who is camera shy...she refused to look at me so I could get a good picture of her!