Thanks for all of the birthday wishes for Middle Son!  I think he had a good day.  He had soccer practice, then he and his girlfriend went to a concert.  We usually don't let him go out on a school night, but, it was his 18th birthday and it was Drew & Ellie, we made an exception.  He had seen this band on a Young Life Weekend and really liked them.  He was so excited that they were going to be in "the big town"! He was jazzed when he came home last night.  He said his girlfriend went in thinking she wasn't going to like it (she thought they were country singers), but she really liked them!   He actually was there when this video was made:

Now for the real reason for the post:
This is the first time I'm participating in this Meme...looks like a good one!

1.  I'm going to start off with Easter Sunday Mass at our old parish in SC.  This church started as a mission church to the African American community, so the singing is outstanding!  I've been singing the "Glory" all week.  You can feel the love in that church!

2.  A day off!  Actually, I had 2 days off this week, but Thursday was spent with YS' high school band at a a band festival, so I'm not sure if that really counts!  And, it was an absolute gorgeous day.

3.  The Blind Side.  We finally got around to watching it.  What an exceptional movie!  Sandra Bullock was very believable as the mom, but, in my opinion, Quinton Aaron was amazing.  He had me feeling sorry for him and tearing up from the beginning of the movie.

4.  YS' high school band participated in a concert band festival, and they received straight 2's (including a 2+)!  If you know anything about band, you may be thinking, "why is she excited about a 2?"  If you do know anything about band festivals/contests, you know that a '1' is the highest mark you can get.  Well, our little band went to the same festival last year, and got all 3's.  They are really improving.  I was able to watch them perform, and, the whole time I sat there thinking how much they've improved the 5 years YS has been involved in band.  When we moved here, there were only about 19 people in the band.  6 years later, there are around 50.  The band director was straight out of college our first year here, so he's young and enthusiastic.  I'm sure I'll be writing more about the band in the future!

5.  This actually happened last Thursday, but  my  favorite coworker in the whole world made sure the staff ordered in last Thursday since 1) I was there (or so she gave that as the reason...I totally believed her!) and 2) we didn't have school on Friday due to it being Good Friday.  It was nice not having to make sure I had a lunch ready to go that morning! 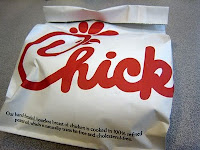 And, on the same day, my other favorite coworker in the whole world (especially when she brings goodies to school on Tues. or Thurs.!) brought this Orange Cake to school.   She also brought the chocolate chip pie last month. The Orange Cake was so moist and delicious, and she said that it took her no time at all to mix up and get into the oven!  I borrowed her picture: 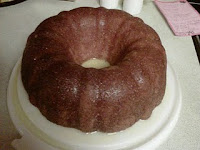 In a saucepan, cook 1/3 c. OJ, sugar, and butter for 2 minutes. Drizzle over cake. (I punched holes first using a toothpick)

Okay, everybody, click on the link below and join in the fun!