First, a little background:  my husband & I lived in a small town (population 33,045)  in Ga. after we first got married.  When we first moved there, we didn't like it there, weren't staying, had 3 babies there, stayed for 11 years; I cried when we moved to a small town (population 67,339) in SC.  (This town seemed like a big town to me!)  We stayed there for 9 years, until I decided I was ready to move home to be closer to my family.  So, we moved to a very small town (population 7,744)  in Tennessee.  This weekend we went back to the town in SC to visit  (ST, SC).  We have wonderful friends there, and there are great little places to eat, not just chain restaurants like they do here in our town in Tn.  So, we went on an "eating tour" of the town this weekend!
First, since it was Good Friday and therefore a "no meat" day, we went to The Mayflower:

(Let me preface this by saying all 4 of us had completely fasted all day except for 1 small snack midday...MS didn't even have that.)  We had these huge (even though they called them the "regular") plates of fried baby shrimp and some cole slaw, but y'all, the hushpuppies they bring out before the meal are to die for!  I completely forgot about the hushpuppies!  They are shaped like onion rings, and are always brought to the table hot.  Dip them in a little tub of honey butter, and OOO-EEE!  You have to really watch how many you eat, otherwise you won't have room for your dinner!  Okay, we're off to a great start; so far so good!

Saturday morning we went to a bagel/coffee shop.  It used to be across the street from the small university in town; it was in a converted house.  Lots of character.  Now it's in a small strip mall.  That should've been our first warning.  We were highly disappointed.  When these 2 sisters first opened the shop, they made their own bagels, and my boys loved the cinnamon rolls we used to get there.  They were huge, and were homemade.  Anyway, the sisters had gone out to Colorado and lived, learning how to make these bagels.  The sisters had the shop for a while, until they started having babies, then they sold it to a man who either was retired or was just about to retire.  The bagel my husband had on Saturday tasted store-bought, as did the cinnamon rolls, and the rolls were not as big.  The cappuccino had me wishing we had found a Starbucks or even a Panera.  So sad; the atmosphere was gone, and along with it, the flavor!  Here's what it looks like now: 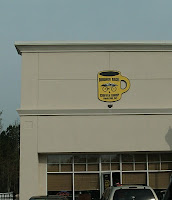 My husband said he was glad I paid for it; he would've asked for his money back!  Here I am with the original sign. 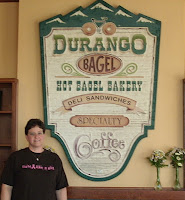 After b'fast, we went over to see some friends.  She was the first person I met when we moved:  our husbands knew each other from work, and when we went to ST, SC to look for a house, my husband introduced us after church.  We picked up right where we left off.  Okay, not exactly, because when we left they had 5 kids and now they have 7.  It was so good talking and catching up with what everybody had been doing for the past 6 years.  Here we are (I was so excited I think I was choking her!): 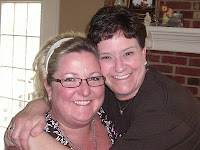 Next stop on eating our way through ST, SC was our favorite hot dog place. 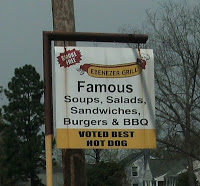 It is still in the same place, you still have to park in the back (unless you're lucky enough to get there as someone in the front is leaving), and it is still packed with customers!  The hot dogs were still really, really good.  When we were looking for a house, our realtor (who is originally from there...there aren't a whole lot of people who actually grew up in ST, SC) introduced us to Ebenezer Grill and Cherry-Lemon Sundrop, complete with an actual cherry in it.  The boys were crazy over it!  Well, now they're serving Cherry Mountain Dew...YS said not quite the same, but close. 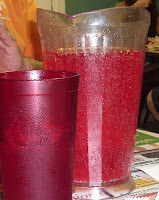 My husband took a picture of the footlong hot dog:

MMMMM-MMMM, those hot dogs are good!  I'm sure the customers were thinking we were really strange and weird for taking pictures of the food and drink, but when you've had them on a regular basis and then don't have it for a while, you don't take them for granted!  Here's the husband and YS coming out: 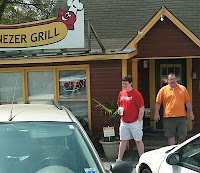 Whew, were we full!  But, we had more to relive!  After our hotdogs, we went by to see the woman who was the lead Speech Pathologist when I worked for the school system.  Again, we picked up right where we left off!  She is an amazing woman!  Unfortunately, I didn't get a picture with her (what was I thinking!).  She is such a sweet, wonderful person!
Next stop:  a shaved ice/ice cream stand not far from where we lived: 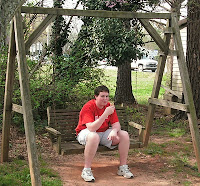 Then, we went by our old neighborhood for visits.  We saw the people who live across the street first...they were outside working in the yard.  Then, we went up the street and saw a couple of other neighbors, including our neighbor's son who had a break from motocross racing this weekend.  He is in his first professional season, so we were glad we were able to see him!  He has turned out to be such a nice young man, and the way he treats his little sister (who is now in 5th grade) is just the sweetest.  Our memories of him include watching him riding up the street on his dirtbike, doing a wheelie the whole way up!  We also got to meet one of our neighbor's adopted grandson.  And, it just so happens we introduced his parents to each other!  Always glad when there's a happy ending!  The grandson is just adorable; the pictures on Facebook just don't do him justice!

After the neighborhood visit, we met our friends that we saw that morning at our favorite wing place.  They have moved locations and have opened up another location, but it was still excellent! 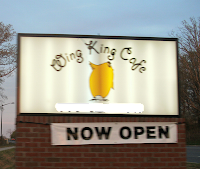 We ended up staying there for at least 2 hours talking, eating, and laughing.

Sunday morning we went to Easter Mass at the church we had been attending when we moved.  This parish began as a mission church for the African-American Community.  They built a new sanctuary after we left because they had outgrown the old one.  It's still fairly small, but is absolutely gorgeous!  This isn't your typical Catholic Mass...the singing is fantastic; I have always left Mass with a smile on my face!  The "Glory" is awesome; people clap (yes, clapping to the music during Mass...I told you it wasn't typical!), and the soloist is incredible.  I had tears in my eyes during so much of that Mass; you can just feel the love in that parish.  The priest who has been assigned to that parish is very ill; I understand that hospice has been called in.  So, we didn't see him, but the priest who was in charge of the parish we originally went to when we moved there was in the congregation at yesterday's Mass.  He is an elderly priest whose health is failing.  We didn't get a chance to speak to him; he left as soon as the Mass was over.  We did get to see some friends whose daughters babysat for us, but their girls are all grown up and our friends are now grandparents.  We were commenting on how the kids all have grown, but we look the same!
We had a tradition of going out to eat at a Chinese Buffet with some friends.  We would sit the 8 kids at one table and the parents would sit at another.  Yesterday we sat with these friends during Mass, then went to eat (of course!).  This would be our last stop on our "Eating Tour", and the perfect way to end it.  Our friends have 5 children:  4 girls and 1 boy.  Their boy and YS are 6 months apart, so our other 2 boys absolutely loved going out to eat with them!  Yesterday, only 3 of the girls were there, so we didn't get to see their son and the other daughter.  It's amazing to see how everyone's children have grown up!  All of our friends' daughters are absolutely gorgeous, and are such good people.
Anyway, we ended up staying in this restaurant for about 2 1/2 hours; again, talking, eating, laughing.  Here we are in front of the restaurant: 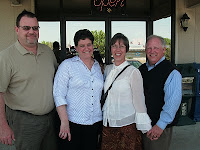 Did you catch how they're holding hands in the picture?  They are so sweet!
So, that wraps up the Eating Tour of ST, SC 2010.  I don't think I'll have to eat again for a week, but it sure was good, except for Saturday morning!  It was kind of strange being back there.  So much has stayed the same, but so much has changed.  There's a new WalMart down the street from our old neighborhood:

Yes, much to the horror of YS (who asked, "Are we really that redneck that we're fascinated by a new WalMart?"), I took pictures of it!
There's also a new grotto at the parish we attended when we first moved there: 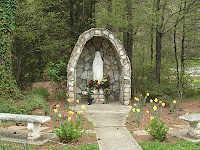 It was so peaceful to sit there for a few minutes by myself with the birds chirping to give thanks to Mary for saying "yes" and accepting the heartache that she endured.  This grotto was in the planning stages when we left.  In the church, there is a new "background" (I don't know what else to call it!) on the altar (it used to be  all brick): 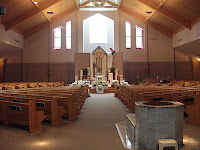 To get to the church, there is now a roundabout right outside of the entrance:

There is a new middle school and 2 new elementary schools which were built in the past 6 years.  But, the Civita Statues are still there (but very few people-including me- can tell you exactly why they're there!): 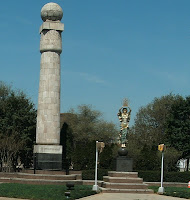 The water tower next to the hospital still has a dogwood flower on it:

The daycare my kids went to is still there and still has the same name: 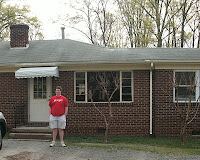 The Oratory is still beautiful in the Spring: 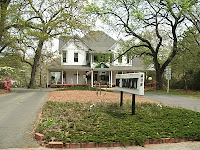 As is the small university in this town: 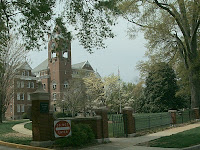 The YMCA is still the place to be: 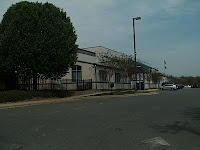 And, when you're 45 minutes away, this greets you to let us know we're getting closer to ST: 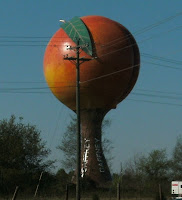 We had such a great visit with such great friends.  One of the best things about ST was that our friends were centered around the Church.  Someone told me that it's not like that anymore; things change-sometimes for the better, sometimes, well, not so much.  Our friends that we met through our church have scattered and are going to different parishes.  It pains me to see what is going on with the Church right now.  I don't know if it's growing pains, if the Church is just trying to go a different direction with some things and people don't like the change, or what is going on.  But, I know it's not just going on in ST, SC, it's also going on in my town here in Tn.  Wonder if it's like that everywhere?
So, the agenda for today:  cleaning, laundry, grocery shopping.  I'm very glad we have another day off!  I have got to start dieting today, especially after all that eating we did over the weekend!  I hope everyone had a wonderful Easter!
Email ThisBlogThis!Share to TwitterShare to FacebookShare to Pinterest
Labels: eating, friends, laughing, small town, south carolina