It's just after 11:00 p.m. on Wednesday night, and I'm sitting here posting on a blog.  WHY?  I usually blog at night, revise after I've slept on it, then post first thing in the morning.  I can't help  it; I'm obsessive a perfectionist that way.  It's been a busy week, and it's just Wednesday.  Monday was the easy day...no after school activities.  MS did have a soccer game, but it was an away game, and it was quite a distance away, so I chose not to go.  So, what did he do?  He scored his 2nd goal of the season.  And I missed it...again.  Tuesday night was a Reunion Meeting.  What a blast it was to look through old pictures and realize that I either didn't go on the senior field trip, or I completely don't remember it.  I'm pretty sure  I didn't go, although I have no reason why.  One of my friends said if she hadn't been in the pictures she wouldn't have believed it!
Tuesday morning I took a Double Chocolate Gooey Butter Cake (Thanks, Paula..as in Deen!)  to school for the teachers in celebration of the end of TCAPS.  It must've been okay...it was all gone by 9:30!

If you've ever tried that cake, you know it's "Slap your grandma" good!  When I got to my room, this beautiful sight was waiting on me:

My heat/air is finally fixed!  HOORAY!  It only took 5 months, but it finally got fixed!  I had a meeting during the day, and, y'all, the view outside of the principal's window is amazing.  There's just a big ole hill with trees all over it.  I had to snap this shot as I was leaving school Tuesday afternoon: 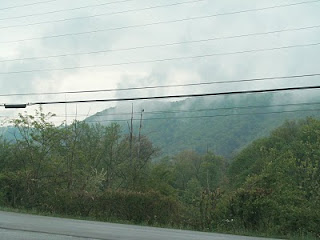 You have to look past the wires, but the view from this school just takes my breath away!  The clouds are incredible.
Which brings me to Wednesday.  I get a text from my intern...she can't find her keys.  She thinks maybe she locked them in her car, and she doesn't have a spare.  After a while she texts me again...still can't find them.  I tell her it's no big deal, just take her time.  I'll get started on the kids and she can jump in when she gets to school.   I finally get a text from her after I get to school:  she found them...in her bathrobe.  She wasn't very late, but I think she felt badly about it.
It's the lovely time of the year when we're running around, trying to get IEPs done  before school's out.  Another meeting Wednesday afternoon, but it didn't take very long.  As I'm leaving  the school, I get a text from MS:  I need to make baklava for him for school tomorrow...a school project.  Great.  I've never made baklava in my life.  My nephew's  wife makes a mean baklava, but I don't have her recipe.  So, when I get home, I look it up on the 'net, and print off the recipe.  When I asked MS why he waited until the last minute, he said that he didn't think I had anything else to do!  HA!  Guess what...I had a band booster budget meeting at 6:30.  And, I still needed to go by Home Depot to see if I could find a couple of ceiling fans I liked.  (More on that in a future post.)  The meeting lasted until 9:10...we closed Panera down.  Then, off to Home Depot for the quest for ceiling fans.  As I'm going in, I get a call from MS saying he's changed his mind...Persian Raisin Cookies would be easier and faster.  I tell him that I'll call  him when I go into the grocery store so he can tell me what we I need to get.  Find a couple of fans I like, then off to Kroger.  That's one scary place at 10:00 at night, let me tell you.  There was a high school boy who was harassing   asking the bag boy where he went to high school, then proceeded to tell him that one of the city schools  was better.  Then, the high school boy looks at me and asks which one I like better.  I tell him I went to the other city school (which is a huge rival  of his school.).  As I'm getting in my car, I look at the car parked next to me...bad mistake.  Really weird looking people.  Not that I have anything against people who look different...I  just don't want to cross their paths at 10:15 at night in a dark parking lot when I'm alone.
I finally make it home, make the cookies (in all fairness, MS did help), and now here I am.  Can barely keep my eyes open, but I'm going to finish this post!  5:30 is going to come awfully early.  I don't think the cookies turned out exactly like they're suppose to; I don't think they were suppose to flatten out like they did.  But they're done.  And I don't care what they taste like. 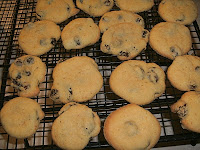 And now it's Thurs. morning, and, yep, I was right:  5:30 did com awfully early this morning.
Oh, and:  Happy Earth Day!  In South Carolina, the town we lived in had a huge Earthday Celebration at the museum (it was a small museum, but it was a pretty good one!).  I don't think they do anything like that here.  Anyway, here's a fact from my "Little White Book":  The first Earth Day was celebrated in San Francisco, which is named after St. Francis, who is the patron saint of ecology.