In addition to "Flashback Friday", I'm also linking up to "Friday Follow" this week.
Time for another "Flashback Friday" hosted by Mylestones.  This week, I chose to write about family vacations.  Growing up in a family with 10 kids, the only vacations we took were to Texas, where both of my parents are from, and we only went every other year.  Both parents are from a family of 8 kids.  Mom would make fried chicken the day before we left, and would have a big box of food to take.  This was before the days of fast food, so when we stopped, it was at rest areas for picnic breakfast/lunches/suppers.  We would drive about half-way the first day; the big treat was staying at a Holiday Inn and swimming when we got to the hotel.  We had games that we played during the trip, but we were only allowed to play them the 2nd day.  I never understood that, but looking back, I know it was so that we wouldn't get bored the 2nd day.   Especially since we didn't have a radio in the station wagon...or air conditioning.  The alphabet game was a must (the first person to find each letter A-Z won...you could only get one letter off of one sign), as was the license plate game. (And my sisters-in-law wonder why we're so competitive!)
I guess there was really only 1 time we had all 10 of us in the car at the same time since there is a 14 year difference between the oldest and the youngest, but  it seems like it happened every other year!  We would have Daddy driving with 2 of the oldest kids in the front, mama would be in the middle of the back seat with a kid on either side (so she could reach everybody and keep us from fighting), and 6 in the "back-back".  Mama would make a palette in the very back so we would be somewhat comfortable.  She had a big jug/thermos of water.  If we had to go to the bathroom and it wasn't time to stop, she had a plastic potty from a potty chair ready for us.  It was also ready if someone got carsick.  We did have some amusement with the cars that passed us trying to count how many people were in the car.  I think at one point someone made a sign that said "10 kids, 2 adults" so people would stop staring at us.
Once we got to my mom's hometown, the fun began.  Out of 8 children on mom's side, 3 were priests and 1 was a nun, but there were still 27 grandkids.   We always stayed at my Aunt C's.   Her house was next to my mom's Aunt F's  house, which was next to Grandma's house.  Grandma lived with Aunt C ever since I can remember; I only remember seeing Grandma walking 1 time, and even then she had to hold onto the counters.  With the 3 houses together, that gave us a huge (or so it seemed!) place to play.  We would have softball games (I remember the fire ants), camping in the yard, and plays.  Oh, we could do some plays!  Here is a picture of one of my older brothers with some cousins in my aunt's backyard: 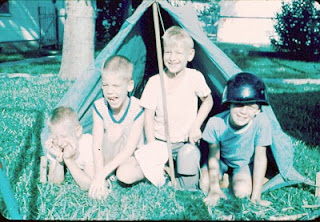 We also had some awesome food!  We had kids sleeping everywhere; at Aunt C's house, Aunt F's house, and maybe even Grandma's house (although I'm not real sure about that).  I loved the way my aunt's house smelled...it smelled like some kind of bread, coffee, and a hint of dill.  Apparently my aunt put pickles away either while we were there or before we got there.  If you've never read the children's book "The Relatives Came" by Cynthia Rylant, check it out.  Then you'll have a pretty good idea of our trips to Texas.  I'm sure Aunt C was so very glad when we left!  My Aunt C was such a saint...but that will have to be another post.
Mom's hometown was just one stop on our South Tx. Tour.  We spent time with my dad's side of the family, but it wasn't an all-out family reunion, that I remember anyway.  I do have memories of attending this huge reunion on my dad's side...it is the biggest family reunion in Tx.  As I got older, there were trips to the Alamo, the Space Needle, the River Walk (although I'm not real sure that's what it was called back then), slip & slide at my Aunt A's house,  and  the Gulf: 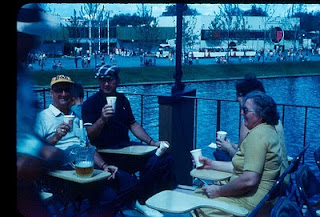 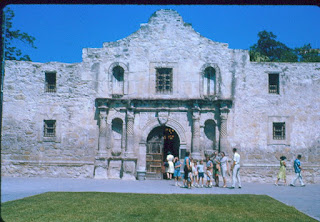 (Obviously this was before my dad had a zoom option on his camera!)

One of my mom's brothers used to take the older kids on a canoe trip on the Rio Grande.  Unfortunately, I was never old enough to go, and when I was old enough to go, my uncle had stopped taking anybody.  Here's a picture of one of my brothers and a cousin crossing the river to Mexico:

I was always so jealous of the ones who got to go:  they always came back with such cool stories:  who lost their glasses, who lost shoes, etc.  Good times, for sure.
The last time I was down in Texas was 2000 for a reunion on my Mom's side.  It was a quick trip, just for the weekend, but man the memories came back.  All 3 houses are now occupied by other people who have no idea of the love and good times that were shared in those houses.  As we drove by the back of the houses, I couldn't believe how small the yards were.  In my mind, they were these huge fields, but in reality, they weren't very big at all.
So, there you have past family vacations when I was growing up.  I have no idea how my parents kept their sanity through it all:  the whining, the fighting, the heat.  It was always sad when we had to leave; I used to beg my mom to move down there.  But, oh, the memories!
I'm looking forward to hearing other blogger's past family vacations!
Email ThisBlogThis!Share to TwitterShare to FacebookShare to Pinterest
Labels: family, Flashback Friday, memories, Texas