If you're Party Hopping, WELCOME!  Stay a while and see what's going on!  My UBP Post is here.

Whew!  What a day!  Yesterday was the first of "TCAPs", the state testing that all 2nd through 8th graders are required to take.  In SC it is called "PACT":  TCAP backwards.  Or, maybe TCAP is PACT backwards.  Anyway, I'm wondering who I ticked off at one of my schools, because I had to administer it to a group of 3rd graders who can't take it with the rest of their class.  It seems that their behavior may affect everyone else's ability to concentrate on the test.  When I saw my list of kids, everyone was apologizing to me.  Since these boys aren't in Speech, I didn't know them.  I do now.  In all honesty, the testing part went okay.  They had 69 minutes to finish the first part of the today's test; 3 of them were finished in 15, the other boy took about 25.  Here's the kicker:  they had to sit there for the remainder of the time, just as if they were in the classroom taking it.  Okay, let me paint the picture for you:  I'm not sure if they have ADHD  or are just active kids.  (Get the picture?)  They are not allowed to bring a book and read, or have paper so they can draw.  Seriously.  Like they're going to try to find some answers in a book.  I encouraged them to go back over their answers and make sure that's what they wanted the answer to be.  I had them go over the answer sheet and make sure they had completely bubbled in their answers and didn't have any stray marks.  They still sat there for 40 minutes doing nothing.

After the 69 minutes, we took a bathroom break.  Oh, I forgot to mention that we were in a portable today so that my intern could continue to have speech with the younger students.  So, we trekked into the main building with me threatening them with their lives to be quiet in the halls.  We walked past the office, and the office staff looked at me, with the counselor's face questioning how it was going; I gave a thumbs up and heard, "Hey, it's a thumbs up!"  The boys did their business, then we went back out to the portable.  The next section was 67 minutes; they were finished in 10-20 minutes.  Again, they had to just sit there.  One boy asked if he could go to the bathroom.  Are you kidding me?  Of course, this was after he saw his class out on the blacktop with their snacks for 30 minutes.  I kind of felt sorry for them...okay, maybe not so much.  Turns out one of the boys (the one who got through 1st for both sections) hasn't had his ADHD medicine all week.  Wonderful.  Those parents should be nominated for Parents of the Year.  Another boy took the tape off of his glasses, then put it back on.  When the 67 minutes was over, we went to the computer lab to waste some time until their classes were finished.  Here's an example of what kind of day it was:  I called the counselor to let her know where I was so the boys' teachers knew where to get them when they were ready for them.  She asked if I had a phone in the room I was in.  HEEEEELLLLOOOO!  We got a good laugh over that!  When I went back by the office, I stuck my head in and said that I was ready for my box.  One of the teachers perked up and asked if I had it there....at school...where it's not allowed.  I laughed and told her it was at home, and she said she was about to say if I had it at school I needed to pass it around.  Now, I'm sure that y'all are astounded  to learn that I actually have this in my frig: 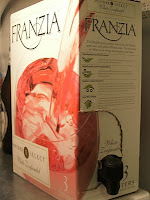 If you look closely you'll see a beer behind the box...a beer that's been in the frig since Christmas.  That's why I have a box.  The man at the liquor store told me to get the box since I'm the only wine drinker in the house and I can't drink a whole bottle of wine by myself before it goes bad.  Did you know wine in a bottle only has a shelf life of 3 days?  My college friends would be in awe if they knew I had an unopened beer that had been in the refrigerator for over a week, much less 4 months!

I had an awesome time with my friends Tuesday night.  We went back to the same restaurant that I had my birthday dinner.  For starters we had fried pickles: 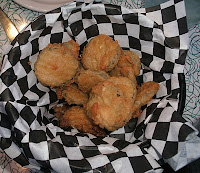 One of my friends (who just came from a Weight Watcher's meeting) ordered these onion rings: 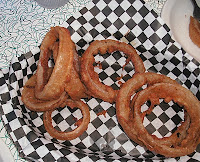 The little one is a normal sized onion ring...they were really big...and good!  This group of friends is from one of my schools; we get together once a month for dinner.  One of the ladies just retired this year and one subbed for one of the special ed classrooms.  We have such a good time; it's nice to get together away from school and chat.  I asked them if they thought I was really weird for taking a picture of food, and one of them raised her eyebrows and asked why. I explained it to her as I was snapping the pictures.  I'm sure they think I'm a little strange, but, hey...I don't really care!

MS had a soccer game that same night, so I left the restaurant and went to the game.  No broken bones that night and MS' team won 9-1.  It was another district game, so in that department, so far, so good.  They were suppose to have had a game on Monday and it was an away game.  The boys rode the bus down there but....no referees.  Crazy.  Apparently the home coach just assumed that TSSAA would have the refs there.  I'm sorry, but if you were a coach, wouldn't you call to verify that you had refs coming?  Oh, wait...these coaches are men.   Case closed.

I really, really need to get my desk cleaned off.  My husband threatened to get on my blog and post about my messy desk.  I told him that it wouldn't be so messy if people wouldn't put their stuff on the kitchen table.  See, in order for us to eat at the table (yeah, I know...novel idea), the stuff gets put on the desk.  Guess I need to make sure I sign out of my blog when I'm through posting!

I suppose that I have jabbered on enough!  Hope everyone has a Tremendous Thursday!
Email ThisBlogThis!Share to TwitterShare to FacebookShare to Pinterest
Labels: eating, school, TCAPS, wine