If you're Party Hopping, WELCOME!  Stay a while and see what's going on!  My UBP Post is here.

This past weekend was just what I needed...nice and quiet!  However, it started out with MS' high school soccer game on Friday night.  It was a district game, and they won 7-0.  Our boys sent 2 of the opposing team's goalies to the hospital:  the first one slid face first into one of our boys' cleats and had to get stitches in his chin.  The second one broke his leg:  he came out of the box and collided with MS.  Usually when MS gets hurt, he bounces right back, but he stayed down a little bit.  (He told me after it was a bit of acting; he was trying to get the other guy to get a yellow card...which looked more green on Friday night!)  He was walking pretty gingerly on his ankle until Saturday evening.  Neither of the collisions resulted in a penalty.  I still don't understand those penalties; I think the refs interpret the rules the way they want to!   I told the moms that at OS' first wrestling match he dislocated his opponent's shoulder, and they commented that my boys were like brick walls!  They are all pretty solid, for sure!  Our entertainment at the game was one of MS' teammates:  he had torn his posterior cruciate ligament and had surgery that morning.  He was taking hydrocodone and was talking up a storm!  I heard him say more that night than I've ever heard him say.  He was sitting near us with his leg propped up  with all of the mamas looking after him.

Saturday my husband took a motorcycle ride to see one of his buddies, so he was gone from Sat. morning until Sun. late afternoon.  MS had his lifeguard recertification on Sat. afternoon, so it was just YS & me.  We made Pan Burritos together (didn't even think to take a picture, but it is like a Mexican Lasagna...very good!)...okay, well, he did most of the work!  Sunday YS went on a band trip to a nearby indoor waterpark that is also a resort; today they are going to a nearby amusement park then to a dinner show establishment tonight.  We're hoping to send the band to NYC next year.

Saturday since everybody was out of the house or playing games in the man room, I made cookies!  I made a batch of these: 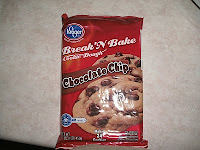 Then I made some of my husband's favorite cookies:  Cake Cookies.  They are so easy and sooo yummy!  This is all you need for the main ingredients: 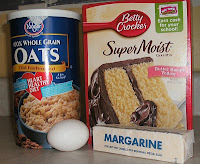 You can use any yellow cake mix, or you can use chocolate.  Then, you pick what you want to add.  M&M's are a favorite, but this was my choice: 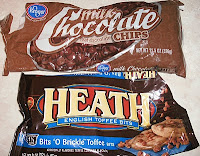 .The recipe also says you can add raisins if you want a healthier cookie...Yeah, right. 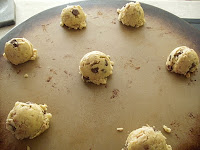 So, here's all you do:  Melt the butter, add the main ingredients (Using 2/3 oatmeal), mix them up.  Then, put in your choice of add-ins and mix that up.  Put on a cookie sheet (I bake my cookies on a Pampered Chef stone)  and bake at 375 for 12 minutes. (No, I didn't clean the stone after making the chocolate chip cookies...you can't get a warm stone wet.  Besides, I was still making cookies!)  The great thing about the stone is that if you leave the cookies in too long, they don't burn.  They'll be really crunchy, but they don't burn! 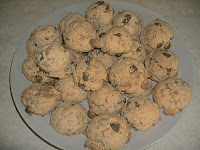 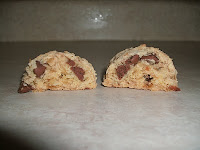 "How did I get the cookies perfectly round?" you ask?  It was my Pampered Chef Cookie Scoop! 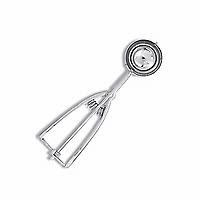 And yes, it is the large scoop!  And no, I am not a consultant!

The Gospel during Mass yesterday was one of my favorites:  John 20:19-31.  This is the "Doubting Thomas" story.  It's been a week since the Resurrection, and the disciples are holed up in a room, in hiding, fearing for their lives.  During the Homily, the priest brought up some points that I had never thought about:  Why was Thomas the one who wasn't there?  Was it because he had doubts so the other disciples told him to leave and come back when he was sure?  Or, was he the least recognizable so he was the one they sent out getting bread and water and other supplies?  Hmmm...good points.  The priest said that when he was in the seminary, one of his instructors told them to read this gospel, and be prepared to discuss the 3 most important words of this passage.  He said that at first he thought it was "Peace be with you"  (until someone pointed out to him that that was 4 words!), then he thought maybe "I send you".  Good thoughts, but not it.  He said when he walked into the classroom, the words "a week later" were on the board.  My initial thought when I heard him say that:  That really relates to how I feel a week after Easter.  It was so hard to go to Mass this morning; I had to make myself go.  The devil wasn't going to win today!  How many of us went to church or Mass eagerly on Easter Sunday, just to have trouble getting motivated to go the next week?  As it turned out, the priest didn't have that in mind when he talked about "a week later", but that was what I got out of it!
I'm not sure how it is in other religions, but to a Catholic, Easter isn't just one day...it's a whole season!  It begins on Easter Sunday and lasts until Pentecost Sunday, which is a period of 50 days.   Catholic Online indicates that Thomas died a martyr:  "He became a messenger of Mercy to India, a missionary who shed his own blood for the Master whom he encountered on that day."  The 2nd Sunday of Easter is also called "Divine Mercy Sunday".  Catholic Culture explains it this way:
"Between 1930 and 1938 Christ appeared to Sister Faustina, a Sister of Mercy in Poland who initiated the Divine Mercy devotion. She was canonized on April 30, 2000, the Sunday after Easter, the Feast of Divine Mercy. On Good Friday, 1937, Jesus requested that Blessed Faustina make a special novena before the Feast of Mercy, from Good Friday through the following Saturday. Jesus also asked that a picture be painted according to the vision of Himself as the fountain of mercy. He gave her a chaplet to be recited and said that it was appropriate to pray the chaplet at three o'clock each afternoon (the Hour of Great Mercy)."  A chaplet is similar to a rosary, or the rosary itself may be used to kind of  "keep track" of what prayers have been said.  A novena is a prayer, or a set of prayers that are said for 9 successive days.  It is amazing that after praying the novena, you know that it's heard if not answered.

Here is a picture of a dogwood in the yard (yes, they're finally blooming!): 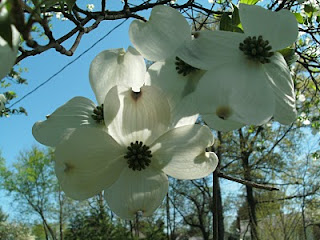 Hope everyone has a Happy Monday!