Flashing Back to Turkey Day 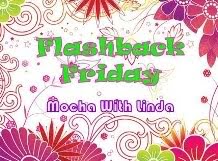 Linda at Mocha with Linda provides us with flashbacks on Fridays so we can relive our youth and see how it affected our adult life.  Here are this week's prompts:
What was Thanksgiving like when you were growing up? What days did you usually have off from school? Do you remember any Thanksgiving activities at school, such as a play or a meal? During the Thanksgiving weekend, did you travel to spend it with relatives or did you stay home? Or did relatives travel to you? What was your family's day typically like? Did you watch the Macy's Parade or something else on TV? Have you ever attended a Thanksgiving parade? Was football a big part of the day? And of course, we have to hear what your family ate! Were there any traditional foods that were part of your family's meal? Which of your growing-up traditions do you do with your family today? And if you are married, how did it go merging your two traditions/expectations?
We only had Thursday & Friday off for Thanksgiving when I was growing up.  Since both of my parents are from Tx., we wouldn't go anywhere for dinner. I don't remember anything special going on at school, except a not-so-good lunch of what they called a Thanksgiving lunch, but I always took my lunch to school, so it didn't matter to me.   I remember waking up on Thanksgiving morning, smelling the turkey roasting in the oven already. We'd get up and anxiously await the Macy's Parade to start on tv.  Oh, it was the best thing EVER.  Just having one tv when I was little, it was "watch what daddy wants to watch or watch nothing at all", so there was definitely football on at the house.  The Tx. A&M and Univ. of Tx. was always a must that weekend.  Gig 'em, Aggies!    Mom actually put down a tablecloth, but I don't remember if we ate off of "real plates" or paper plates.  Of course we would have turkey, mashed potatoes, green bean casserole, some kind of jello/fruit salad, and rolls.  I'm sure cranberry sauce was in there somewhere, but, ewwww.  Something about seeing it come out of that can just doesn't do for me.
After I got married, our tradition changed a bit.  Since there are so many of us, we switch holidays with the family and with in-laws.  This year is our turn to be at home for Thanksgiving, and with in-laws for Christmas, although it doesn't really turn out that way.  Mom  is a big believer in making your own traditions, which is what she had to do after she & daddy got married and moved to Tn.   With the boys playing high school football, and the high school having a game on Thanksgiving weekend for the past 6 years (this year makes it 7, but we're here even though YS is in the band), we haven't been able to go anywhere on the "off-year" Thanksgiving.  And, this  year, a few of my siblings just don't seem to realize that it's our turn to be home, and 1 has decided to go to her step-daughter's house on the other side of the state (even though she said they weren't going back...but that's a whole different story).  And, my youngest brother isn't coming in because the stupid airlines have jacked up their prices, AND my oldest sister isn't coming in because she wants to save her vacation days until her 2 boys come in for Christmas.  Then we have one of my sisters who is doing something with her sons, another sister who is going to be entertaining her elderly MIL while her hubby & sons are hunting, and a brother who is going to his son's house for dinner.  So, we will have a meager 21 people at my house for Thanksgiving Dinner, 22 if you want to count my niece's new baby.  So there you have it.  I don't know if that's what Linda had in mind, but, yeah, I'm a little ticked that people aren't following the rules this year, and, yeah, I'm a little ticked that we aren't going to DC to see my BIL & SIL because it's our year to be home and I spoke up and said we could have dinner at our house...again.  And, yeah, I'm also a little ticked because everybody is having to bring a couple to a few things this year instead of just one.  But it's going to be okay, right?
So, I have 6 days to get the house in order and make a couple of pies, and make sure we have enough tables and chairs.  That's along with having annual reviews and initial placements at work.  I have no idea why I do this to myself.
Email ThisBlogThis!Share to TwitterShare to FacebookShare to Pinterest
Labels: Flashback Friday, follow friday 40 and over, holidays