Meet Me on Monday: 20th Edition 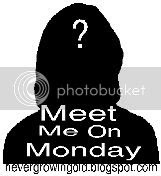 According to Java:
"Blogging is a funny thing...we tell our most intimate thoughts for all to read and yet most of the time I find myself sitting and wondering, "who is this person!?"  I know them...but yet I don't know them!  I want to know who the person is behind all those words so I thought of a great way for all of us to "meet" each other!

Every Sunday I will post five get to know you questions that you can copy and paste into your own Monday post and we can all learn a little more about each and every one of us!!

"Its a great way to to meet new friends and for others to get to know me better....one Monday at a time!!!"....as quoted by the Chacogirl!! I will make this SIMPLE and FUN!!"
This week's questions:

1.  Have you ever been on a cruise?
No.  We've been talking about it, but haven't done it yet.
2.  What is your favorite way to eat eggs?
Scrambled.  Most definitely.
3.  What is your favorite reading material?
Books, although blogs are closing in quickly!
4.  Name all the pets that you have ever had?
Growing up we had a dog, Socks, but he was hit by a car in front of the house where I live now.  (I actually just realized that...weird.)  One of my sisters brought home a cat (Elton), but he ran off after my daddy (farm boy, and all) fixed him with a rubber band.  We also had a dog named Pup, but we had to put him down after he bit a neighbor.
Since I've been married, I've had several dogs:  Gizmo (from The Gremlins), Murdock (From The A Team), Duke (because what else do you call a Pit Bull?), Petey (again, just because), Scooter (CH had always wanted a dog named Scooter), Rusty (I have no idea why), Abby (CH found her after she had been abandoned), Dixie (from Designing Women),  Molly (no idea why), and now we have Ally (from Ally McBeal) & Pepper (because she was almost all black when we got her).
5.  Were you ever a girl/boy scout?
I was a girl scout, but not a very good one.  Bad memories:  When I wore my Brownie dress to school in 2nd Grade, I got my 1 and only paddling.  I never wore it again.  Then, when I was older, we went to the girl scout camp and spent the night.  They had these "tents" with wooden floors.  I heard mice the whole night long scurrying around, and, with my imagination, just knew they were going to be running over me.  I never went back there again.  And soon after that I stopped being a girl scout.

Email ThisBlogThis!Share to TwitterShare to FacebookShare to Pinterest
Labels: Meet Me on Monday