I've worked in 6 school systems in 3 states over the 27 years I've been a Speech Pathologist.  This is the first school system that has recognized Veteran's Day.  Sure, it's a day off, and I suspect that the kids have no idea why they're getting the day off.
I have a few Veterans in my life:
My daddy, who joined the Navy as an airplane mechanic and worked on an aircraft carrier at the end of WWII.
My FIL, who was a career Army man and a helicopter pilot during the VietNam War.
CH, who attended USMA to play football, and spent quite a few years (until YS was born) in the National Guard.  He didn't participate in Desert Storm, although he was chomping at the bit to go.
My BIL (CH's brother), who is full-time Army National Guard and is a veteran from the conflicts in the middle east.
An older brother who retired from the Naval National Guard as a SeaBee and is a Desert Storm Veteran.
In addition, I also have family members who will one day be able to say they are veterans:
My oldest brother who is full time Air National Guard.
1 nephew who graduated from USMA.
1 nephew in ROTC in college.
1 nephew who will be going active in the military after completing ROTC training while in undergrad school (he's now in grad school).

To these men in my life, and all of the men & women who have ever put their lives on the line for the love of our great country,
THANK YOU!


Please make it a point to tell service men & women thank you for their service.  It will make their day.  It always chokes me up a little when I voice my appreciation to them.

Here are a couple of pictures of my favorite veteran: 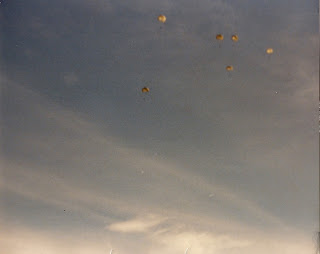 My "Super Duper Paratrooper"!  (He's the one coming down first.  I could always tell which one was him because he was the first one down!

CH before the "C":  He was a lean, mean, US Army fighting machine!
Email ThisBlogThis!Share to TwitterShare to FacebookShare to Pinterest
Labels: armed forces