This is what I saw the other day when I went online to check the weather.  Could they have caught her in a better pose? 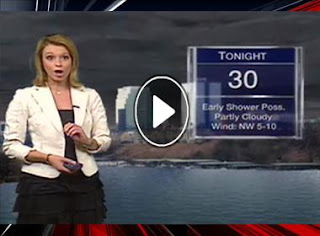 I've had quite a crazy week this week. I don't think I remember what my kitchen looks like, to be perfectly honest.  Last Saturday, the 5th grade at one of my schools had a fundraiser at McAlister's Deli to benefit one of the teachers whose house caught on fire a couple of weeks ago.  Thankfully they weren't at home when it broke.  It was, however, a total loss.
Sunday I actually cooked:  Chicken Pot Pie, compliments of my SIL.  To be perfectly honest, YS did most of the preparation.  For some reason, we just had a little bit of a problem getting the top crust to brown.
Monday the church sponsored a "Women's Appreciation Dinner".  We had a nice dinner, followed by a speaker, Cooter.  Okay, Cooter isn't his real name, but it fit him, for sure.  He was a very good storyteller, but there was just one problem.  As I was listening to him, I thought, "something isn't right".  The more I listened, I realized what it was:  He says his /l/ sound at the beginning of the word with the back of his tongue.  Yes, it bothered me the rest of the night.  I don't think anyone else realized it, but to my trained ear, it was kind of irritating.  But, like I said, he was a good storyteller, and I did my best to ignore the error!
Tuesday we had our special ed dinner out.  We went to the local location of the restaurant I had gone to during our Sisters' Weekend.   This location didn't disappoint, at all.  And, it's always nice to spend some "away from school" time with coworkers.
Wednesday I had a band booster executive board meeting at Panera.   The broccoli-cheddar soup is amazing, by the way.
Yesterday was a day off!  YAY!  CH went to Applebee's to eat dinner (they had free dinners to veterans) so I just grabbed something from the freezer at the grocery store for YS & I.  I know, I know...I really should've cooked, but I had a case of the lazies.
Last Friday was really weird.  When I got home from work to let the girls out before I went to help setup the concessions for the game, it started sleeting.   At first I thought it was hail, but it just kept on coming and kept on coming.  This is what the rail on the porch looked like: 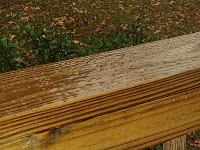 Weird, huh?  It stopped just before I left to go to the game, which was weird, too.  The small town HS scored 21 points in the first 7 minutes.  The Mercy Rule went into effect the 2nd half, plus the quarters were reduced to 10 minutes instead of 12.   Even with cleaning up the concession stand and literally being the last person to leave the stadium, I was home by 10:00...the game started at 7:00.  Weird...just weird.
Sunday afternoon, one of my sisters called and said she was bringing this over: 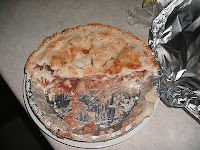 Sorry I didn't get a picture of the whole pie, but MS was home.  I don't think anything else needs to be said except that I ♥ my sister.  No. Lie.  I also love living close enough to my sisters so they can do nice things for me!  Especially when they bring me apple pie!  (This last sentence was added after Kimert chastised me for not specifying what kind of pie it was!)
One last thing:  I've posted views from one of my schools this past winter in the snow.  I was walking past one of the Kindergarten classrooms on Tuesday and was just stunned by the view and wanted to share it: 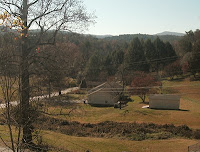 Absolutely gorgeous, isn't it?  And, just to be fair, here's a shot from the parking lot of my other school: 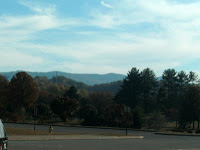 I'll have to try to get a picture of the view behind the school...it's beautiful, too.
Have a great weekend!
Email ThisBlogThis!Share to TwitterShare to FacebookShare to Pinterest
Labels: follow friday 40 and over