The Tudors Season 4 DVDs are on the entertainment center, ready to be watched.  I knew if I sat down, I'd be enthralled and nothing would get done.  So, I tried to be disciplined and do things around the house.  My desk went from this: 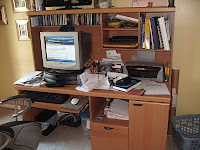 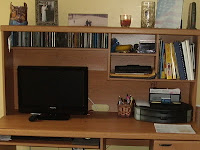 Because CH bought me this little gem: 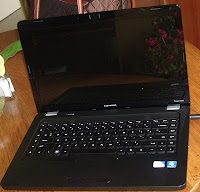 Isn't he a sweetheart?  :D
So, after I got the desk cleaned up, I had to clean the floors.  And the kitchen.  Then the living room.  And then the bathroom.  Plus dusting.  And all this while washing clothes.  What a day off!  The good thing is, I have another day off tomorrow because of Election Day, so that's the day I'll get some Tudor-watching in!
Saturday we hosted a band competition.  We had 25 bands attending, and at least 2 of these bands had around 250 members in them...each.  Our high school only has a little over 500 students, so of course our stadium isn't very big.  My biggest worry was that we wouldn't be able to fit everybody in.  It should've been that I would be able to get out of the concession stand.  For some reason, the door wouldn't open, so we were trapped.  The good thing was that we were incredibly busy, so we didn't have a chance to leave.  The kids that worked ended up crawling through the window. I texted the booster president and told him that we were stuck.  He must've thought I was joking, because I didn't get a response from him.  So, I called him.  He came up, crawled through the window, and tried to get out.  He couldn't, so he decided to crawl back through and try to get the policeman's help.  I have no idea how long they worked on the door, but they ended up having to take the whole doorknob off of the door.    Supposedly that was the worst thing that happened all night, so the festival must have been a success!  Yesterday was a recuperation day.  Every part of my body hurt Saturday night.  We were so busy that I only had time to eat 1 piece of pizza all day long.  Hopefully we made a lot of money for our kids!
Email ThisBlogThis!Share to TwitterShare to FacebookShare to Pinterest
Labels: band, tv