Joyce has come up with some excellent questions for this week, with some help from her friend.
1. If you had known what they knew then, would you have boarded the Mayflower?
Not being a very adventurous person, I would say no.
2. How far have you traveled on a boat and how do you feel about boats in general?
I didn't grow up around boats.  They make me a little uneasy.
3. What traditions have you kept, acquired thru marriage, and/or tossed? If you're single what are some of your family's favorite Thanksgiving traditions?
We've pretty much kept the same traditions I had growing up.   I once knew a person who used to eat Chinese food for Thanksgiving...it's just what they did.

4. What time is dinner and how many will be round your table? And what is the one side dish you cannot do without on Thanksgiving day?
2:00, and there will only be 21 of us.  I can't do without my sister's sweet potato casserole.  One of my brothers can't do without mashed potatoes. If you read my post from Friday, you know that a couple of years ago we didn't have them, and he was not happy!
Yes, I know it goes against all I believe in to ask for 'just one', but I made up for it by asking three questions here.
5. Have you ever used a fire extinguisher? Do tell....
Oh, my.  I don't think this is a very good question around Thanksgiving!  Hope it's not a bad omen!  :)
I've never used one.  I came close once.  My mom was working at a hospital on the night shift when I was in college (I think that's when it was, anyway).  One Saturday morning, I was in my room (which was across the hall from my parents' room), and one of my little brothers came running down the hall to tell me the kitchen was on fire.  He had decided to fry some bacon in a skillet that had a crack in it.  Anyway, his running down the hall along with the word "fire" made my mom jump up and run to the kitchen.  She used the fire extinguisher.  I was going to throw some baking soda on it.
6. Tell about a situation that caused you dreadful trepidation and feet dragging, only to realize later it was a true blessing.
Gosh, Joyce is making us think too hard this week!  When we moved from Ga. to SC, it was hard on me.  I finally (after 11 years) felt like  Ga. was home, then CH was transferred.  Even though it was kind of exciting to be moving to a completely different place, I really didn't want to go.  I had a hard time at first and was actually homesick for Ga.  It turned out to be a blessing because CH converted to Catholicism after we had lived in SC for a few years.  We had wonderful friends and an awesome Church family.
7. Baked, sweet, mashed, hash browned or french fried...which one's your favorite?
Mashed.  With some of the dried Ranch Dressing Mix.  Yum.


8. Insert your own random thought here.
When I was a guard instructor for a high school in Ga., I had the opportunity to accompany them to the Macy's Thanksgiving Day Parade.  What an experience that was!  It was amazing to see what happens "behind the scenes"  and to see NYC for the first time.  In addition to the parade, we went to see "Cats", went to the top of the World Trade Center, visited the Statue of Liberty, visited the Fish Market (although I'm not sure why!), and ate at the Hard Rock Cafe.
Me with one of my "girls"  (She went on to go to the same college I went to.) 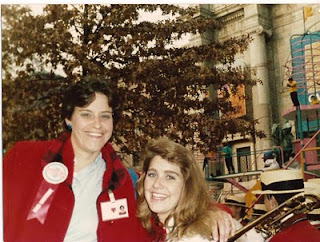 The band in the Parade.  (The straw hats are a tradition for this band.  I saw a post on FB from the man who was assistant band director:  the uniforms were at the cleaners last week, and the cleaners caught on fire.  The uniforms were lost.  The cleaner's insurance will pay for part of the loss, but the band is scheduled to participate in the local Christmas parade, as well as a big parade in Atlanta.  Talk about your dumb luck.) 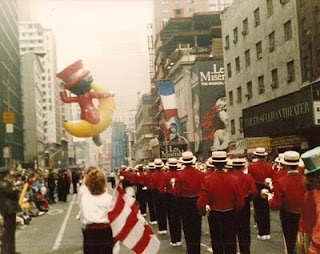 Right before the parade began (That's Phylicia Rashad in the apple) 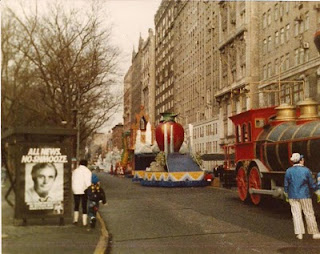 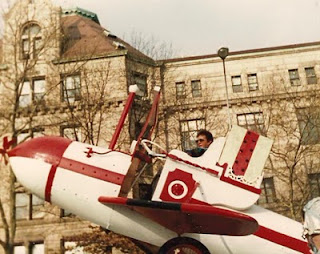 It was quite an experience!  It was a lot of "hurry up and wait", but it was a good time.  Even getting up at 3:00 a.m. to be on the bus by 4:00 was memorable.  And, seeing a billboard with a naked woman on it on the route was interesting.  One of NYC's finest laughed at me and one of the girls because we told him we didn't have billboards like that in Georgia.  It was a great trip.
I hope everybody has a wonderful Thanksgiving.
Email ThisBlogThis!Share to TwitterShare to FacebookShare to Pinterest
Labels: Wednesday Hodgepodge