Yesterday when my alarm went off at 5:00 (bus duty, remember?), I let the dogs out, and then went back and looked longingly at  my bed.  Gosh, I really wanted to just crawl back in there.  The thoughts of all of those smiling faces gave me the energy to get going and get to school.  (By the way, I've got some oceanfront property in Arizona to sell...)  I actually made it to school on time yesterday.  The newbie teacher must've realized that the gym is not the place to be during the last rotation, because she immediately went there first.  Great.  They were even louder yesterday than on Monday, if that's possible.  Plus, they all wanted to put their hands on each other, eat suckers (how can they eat candy at 7:15 in the morning?), and see how loud they could  be (how can they be that awake at 7:15 to even want to talk to anybody?).  I went over to the 2nd grade section and told this little boy to keep his hands to himself, and that he didn't have the right to put his hands on anybody else.  (That sounded very "teachery" of me, didn't it?!)  He looked straight at me and made this face, like he was mocking me.  I had that split second where I thought about ignoring it, but, 1) I wasn't feeling great (stupid cold), and 2) I had bus duty and had been at school since 6:45.  So, off to the office he went, where he told the secretary he had no idea what he had done to get in trouble.  Tuesday newbie teacher (who is actually working a maternity leave) made a kid cry.  I think our group now has earned the "Bus Nazi" title.


I'm standing outside during that rotation, and I get this lovely picture from my husband: 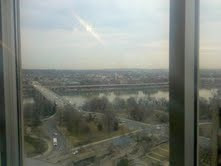 In case you can't tell, this is a picture of the Potomic (I think).  This is the view he had during breakfast.  Great.  Rub it in.  If the meeting would've been next week, we could've gone with him.  We (and by saying that, I mean the boys & I) have been to DC a couple of times.  I absolutely love it!  It's amazing how you can just feel the power when you get there.  I told my sister-in-law that I felt so metropolitan when we rode the metro!
The first time we went it was pretty cold: 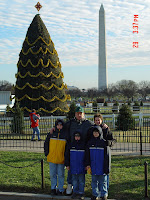 The last time we went we saw this: 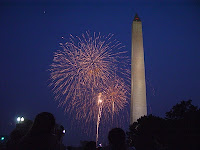 Unbelievable.  Hopefully we can get back up there before some family members get transferred.  Nice place to visit, but I don't know if I would enjoy living there.  I'm so small town!
At one of my schools, we have some Haitian children that just moved in.  They are absolutely adorable, with big beautiful smiles.  I walked by as a Kindergarten class was in line to go to the bathroom, and the teacher said, "I think we have a communication barrier."  I said, "Why, what's going on" to which she said,"Well, I told her to get in line and she took her shoes off and went to the bathroom!"  God love her!  I looked over, and saw her shoes perfectly placed on the floor!  I'm sure that before school ends she'll be in the mix with all of the other kids.  Isn't it amazing how kids are so resilient that way?
Okay, this will be my last post about  bus duty, since Friday I'm doing my "Meatless Fridays".  Hope y'all have enjoyed a peek into that wonderful world!
Email ThisBlogThis!Share to TwitterShare to FacebookShare to Pinterest
Labels: bus duty