It's finally here...the first day of Spring!  I was finally able to ride in the car with the windows rolled down!  I also decided it was time to put a little "Spring" on my blog!

Yesterday I met a friend at her condo and we walked to lunch at The Tomato Head.  This was my first time eating there at this location.  It's downtown (or as we used to call  it:  "Cowtown") with tables sitting out front.  I was going to take a picture, but didn't want anybody to think I was a stinkin' tourist, or a local who has never seen tables outside on the sidewalk before.   Even though I could eat meat yesterday, I stuck with the plan and had a Cheese Melt, which was delicious, by the way.  It's probably a good thing I didn't look to see what the dessert specials were, because you tell me if you could've passed these up:
The “Guten Nacht Gorilla” Special Dessert: Whole Bananas Spiraled with Cinnamon and Brown Sugar and Wrapped in Pizza Dough – Topped with Vanilla Haagen-Dazs Ice Cream
Cupcake of the Day: Strawberry Tiramisu
Vegan Cupcake of the Day: Red Velvet
Cobbler: Blackberry/Blueberry/Raspberry with a Scoop of Vanilla Haagen-Dazs Ice Cream

I didn't think so!  We took the long way to get there (my friend forgot exactly which street it was on!) and the short way back.  This friend is my "football" friend:  Ever since we moved back, she is who I sit with at high school football games.  Her son is MS' age and she has a daughter who is a year younger.  I call her daughter my "surrogate daughter".  I absolutely love her, and if I had a daughter, that is what I would hope mine would be like.  She (the daughter) has come to away games with my husband and I a couple of times.  She's a great kid, and my friend is doing a wonderful job being a single parent. (And, no, she's not reading this!)  On the way back, we saw these signs of Spring: 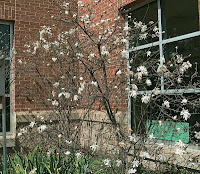 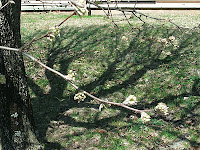 And this when I got home: Okay, you gardeners out there, tell me if these are weeds:

I know they look like clover, but they're actually really little and dainty.  And these:

I know that they're all weeds, but they really are pretty...too pretty to pull right now.  And there are so many of them!  My plan is to spray weed killer on them and save my back.  I really, really thought about pulling them, but I did get in there and rake the leaves and dead weeds out, so it actually looks like a nice weed garden instead of a crazy, messy one!

Husband and YS went camping last night.  They put 2 of the motorcycles on the trailer, and drove up to the mountains to camp. Husband's thought is that there are fields so he can let YS get more comfortable on the bike.  He has high hopes that YS will want to ride and they can take long rides together.  OS rode some and MS has no interest whatsoever.  And, I think I've mentioned how I feel about it.  YS wanted a picture and suggested I put it on my blog, so here it is: 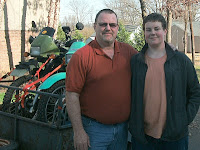 Since it was just myself & MS, he decided he wanted to take advantage of being able to eat meat on a Friday during Lent, and wanted to go to Burger King.  They do have the best french fries, y'all!  As we're heading over to BK, he gets a phone call and is talking to a friend.  Then I hear, "I'm heading to Burger King with my mom.  We're on a Burger King Date!"  MS is my son who has never had a problem with coming up to me in front of his friends, and grabbing me and hugging me and telling me he loves me.  He is forever my Snuggle Bunny!

In other news:  MS has made his college decision.  Looks like he will be donning Big Orange in the fall.  This is really crazy, but even though the school is only 15 minutes away, I'm really nervous about him going there.  It's just so big, and that, to me, is scary.  I guess it's just the unknown for me:  I didn't go there because it was too close to home; I was ready to get away and be my own person.  I told him that he needed to meet people from other places and not run around with people from this county or that he ran around with in high school.  I don't want it to be an extension of high school;  I want him to meet people from other backgrounds, and I want him to be ambitious enough to want to get away from this small town, even if it's only for a short time during his life.  He needs to see what else is out there.  If he lives on campus, I don't want him coming home every weekend; he needs to develop relationships with people who aren't from here.  But, he wants to be there for this: 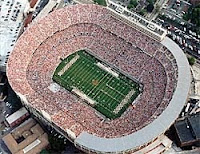 I can't say I blame him, because if he goes to the school I went to, this is all he'll get:

Now I'm sure everybody is wondering how many pictures I can get in one post!  Hope everybody has a nice Saturday!  I'm going to leave you with a link up to Then Sings My Soul Saturday (TSMSS) with Amy over at Signs, Miracles, and Wonders.  This is one of my favorites; another one that I've played over and over and over!