Let me preface this by saying this:  As a Catholic, we are taught from an early age (during our First Eucharist Preparation) that we are to fast for 1 hour before taking Eucharist.  See, we believe that a miracle is performed on the altar at every Mass:  we believe that the host & wine are miraculously consecrated, resulting in Christ being present in the host & wine.  Your tongue should be clean and ready to receive the Body of Christ.  Anyway, I think you get my point as to what a serious and holy time the Mass is.  SO, I'm waiting for Mass to begin, and in walk these 2 girls with coffee in their hands.  I'm in total disbelief.  What do I do?  Am I suppose to go over and explain to these girls that they aren't suppose to be doing this?  Is it really my responsibility to do this?  Should I mind my own business and let God take care of it?  While I'm stewing over these questions, I see that they are sitting next to a lady who holds a position in this parish.  Then, I notice their dad comes in and sits beside them.  Thank you, Lord, for holding me back and not being a busy-body!  I'm sure one, if not both, of these people said something to them.  I'm such a rule-follower.  I'm fairly certain that comes from my Catholic upbringing! 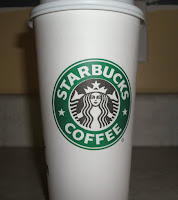 I can hear what you're thinking:  Oh...my...gosh!  She said she was "small town", but is she that "small town" that she just discovered Starbucks?  No, silly, it's what's in the cup that's the discovery!  Dark Cherry Mocha.  With soy instead of milk.  I love my lattes, but they've really been upsetting my 40+ year old stomach.  So, I had this great idea to try soy.  And, it worked!  I gave Youngest Son (who will be simply "YS" from now on) a sip; he said it tasted like Ben & Jerry's Cherry Garcia.  Then, he had a great idea:  They (someone) should take the B&J flavors and put them in coffee!  What a great idea, YS!
Oldest Son (OS from now on, because I'm really getting tired of typing the whole thing out!) is getting ready to head back to college.  It's so sad seeing him leave.  It's not as hard as it used to be, but it's hard just the same.  He said that he would live at  home and go to a large university that's practically in our backyard if we would pay his tuition.  I told him to head on up the road!  He attends a smaller university that is about 2 hours away and that has a much less expensive tuition.
Middle Son (MS) gave me a hard time because I bought chocolate "drink" instead of chocolate "milk".  I told him to stop looking a gift horse in the mouth...it's been a long time since I've bought chocolate drink or milk.  He also complained about not having anything good to eat in the house.  Okay, I ask them every time I go to the store about needing or wanting anything.  Their response:  No, or every now and then I'll get "deodorant" for an answer.  "Chicken taquitos", he says.  "Those are really good."  Thanks for the feedback.
Maybe I'm just an old-fashioned mom (or not very cool), but what's with kids going to the beach with their girlfriend's family for a week?  I have a friend who posted that her family just got back from the beach, and now her son (who is a junior in high school) is turning around and going again with his girlfriend's family.  I believe in trusting your kids, but I'm not sure I could trust mine enough to go with his girlfriend to the beach for a week; with or without the parents.  Especially at that age.  I've seen too many kids get put in situations that they are too young to deal with, and have it change their lives forever.
Told you these were going to be 'snippets'!  Thanks for allowing me to get those things off of my chest!
Email ThisBlogThis!Share to TwitterShare to FacebookShare to Pinterest
Labels: college, Mass, starbucks, trust