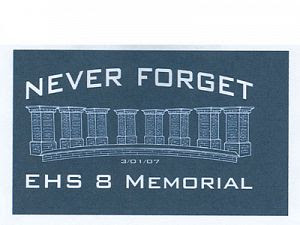 My posts will rarely be this serious (except for Fridays during Lent), but I really wanted to post about the "EHS 8". On 1 March, 2007, my husband's hometown experienced a terrible tragedy. An F-4 tornado whipped through the town, destroying the high school and an elementary school, as well as many lives. The high school took the brunt of the tornado: 8 students lost their lives. My mother-in-law was at home (less than a mile from the high school), and, while their house had quite a bit of damage, she came out unharmed. The house next door and a couple of houses across the street were destroyed. What was amazing after the tornado were the stories that came out of that tragedy. One of the students who was killed lifted a beam off of another student so she could get free, only to have the beam fall on him. A very pregnant teacher shielded a student from getting hurt. Not only did the town come together to put their lives back, but it seemed as though the whole state, if not much of the Southeastern United States, came to their aid. The landscape of the town changed after that. Where there were trees, there are now fields. Where there were houses, there are just slabs of concrete or nothing at all. The high school students are going to school at the town's junior college: only the senior class knows high school life in the high school building. Another high school is being built on the other side of town. The football field (which had a lot of damage) will also be relocated. This town (as many southern towns are) is a big football town; they just finished their last season in that stadium. My husband and brother-in-law have a lot of good memories of that field, as well as the high school. A lot of "what ifs" went through my mind after the tornado: What if we had moved to my husband's town instead of mine? My boys could have been in that building; one of them could have been in the hall that was hit the hardest. The pictures and stories of parents frantically searching for their children could have been us. As a mom, I don't think you can help but think about those things. I know I hugged my boys a little tighter after that day. A few weeks after the tornado, Oldest Son & I went down to do what we could to help. I thought I was ready to see the damage, but I wasn't. I n my mind I can still see the blue tarps on the houses and smell the pine trees that were blown down by the winds. What was amazing was that on the other side of town, things looked "normal". The people just picked up, got to work, and moved on. The families of the 8 students have formed a memorial scholarship, which will continue until the children who were in Kindergarten in March, 2007 graduate from EHS. Please keep the families of the 8 in your prayers. It's been 3 years since the tornado, but I'm sure it feels like yesterday to them. They have experienced the unimaginable. I would like to thank the families for allowing me to use the "EHS 8 Memorial" logo which was put on t-shirts this year. The t-shirts were sold to benefit the scholarship. If you would like to give a donation, the address is below:

(Designate that your gift is for the EHS 8 Memorial Scholarship Fund.)

Thank you for taking the time to read this post.