First things first:  H-Momma at Family Team is sponsoring a giveaway.  She's giving away a chance to win your choice of bunch of different stuff, so check out her blog and enter!  I'm really hoping for the Olympia Polk Dot Shopper Tote! I saw a shopper tote when we were in Copenhagen last summer.  I considered getting one, but wasn't sure how I'd get it home.  Please, please let my name be drawn!

MS' high school soccer team had a tournament over the weekend.  They came back with a record of 1-2-1.  All of the teams are from much larger schools, and 2 of them are private schools.  The last team they played is a very large private school whose kids play year round together in club soccer.  I'm not a soccer mom; in fact, the other moms would  laugh at me when I would say something.  They are very patient with me and explain the rules.  Speaking of the rules (specifically the penalties), I have no clue about what constitutes a penalty.  I'm  very convinced that they are very objective, and it just depends on if the referee wants  to call it or not. Very confusing!  The team spent the night at the location of the tournament on Friday night.  We went down Saturday morning for the final 2 games.  When we saw MS that morning, my husband asked if MS had shaved his head again.  I told him that when he left the house Friday  morning, he hadn't.  Guess they got bored Friday night and shaved his head!  Good thing he looks good with it! During the last game, he appeared to have a collision with a teammate.  From where we were sitting, it looked like they hit heads.  Thank goodness MS just got kicked in the head!   We could hear the collision in the stands, on the other side of the field, but I think it was just their shin guards hitting.  It brought back a memory of him getting a concussion 3 years ago by hitting his head getting in the van.  We were running late for school, and I was yelling pleading with him to hurry.  As he got in the van, he hit his head.  I get a call around 1:00 from him saying that his head is hurting really bad and he has double vision.  I asked if he could get some tylenol and make it to the end of the day (Mom of the Year, here!), and he said he would try.  About 30 minutes later, I get a call from the Student Affairs' Secretary, and she said he was throwing up!  Here's another reason I'm glad we moved home:  I called my mom and she picked him up so I could meet her at the dr.'s office!  He did have a "little" concussion.  Here he is at the tournament: 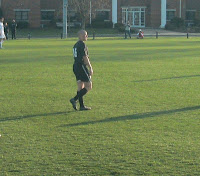 We saw the prettiest Bradford Pears down there.  It's weird how you drive down the road  for an hour and the trees are blooming! 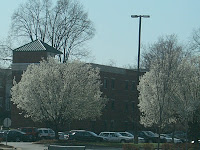 My husband planted a couple of small Bradfords in our yard shortly after we moved here, but they're not blooming yet.  They're getting there, though!  Here's what they look like right now: 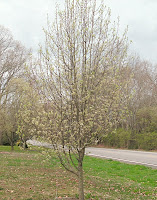 They still look really scrawny, but believe me, they have grown a bunch since they were planted.  The dogwoods aren't blooming yet, but there will be pictures of that one street I talked about as soon as they are!

So, I went to Mass yesterday in a monsoon!  It wasn't raining when I left the house, but by the time I got to church it was pouring and the wind was terrible.  Some of the things I love about this parish is that it's geared toward younger people, so there are guitars and great music.  I love the formality of the Catholic Mass, but also that at this parish, everything is laid back.  During the prayer intentions, the lector reads the intentions, then opens it up to any that parishioners have.  There seemed to be an awful lot yesterday morning, complete with someone appreciating Catholic congressmen who stood up in support of the health care  reform.  (I couldn't bring myself to say, "Lord, hear our prayer" after that one!)  Then, a couple of minutes later, someone said something about the other side. Seriously?  We're going to do this here, during Mass?  I heard a lot of murmurs after that.  I really think Father needs to do away with opening up the intentions.  Most of the people  who say something are the same ones who say the same things (which could be added to the list that the lector reads), and some of them are really for personal intentions which should be said to themselves.

The Vols lost a close one yesterday.  It wasn't a good weekend for the basketball teams, but  the guys got farther than they ever had, and almost made it to the Final Four.

This being my birthday & all (29 yet again!), I'm going to leave you with a picture of me with a birthday cake my mom  made me a few years ago:

Yep, apparently I got a blow up duck and a box of crayons for my 3rd birthday!  Birthdays weren't really a big deal at our house.  I guess with 10 kids, there wasn't a whole lot you could do for one without doing it for everybody else.  We were allowed one birthday party: I had mine when I turned 7 and got mad at my mom because she made me invite everybody in my class (there was one girl I didn't want to invite!).  I did get an extra party in, though.  I don't remember how old I was, but a friend who lived up the street had a surprise slumber party for me.  Oh, the things we remember!
Email ThisBlogThis!Share to TwitterShare to FacebookShare to Pinterest
Labels: birthday, give away, Mass, soccer