First day of Spring Break.  This is the only day I was setting aside to sleep in.  Here's how it went for me:
Husband's alarm goes off #1:  dogs haven't been out, so husband takes them out.  Going well so far.  Except...husband's alarm goes off 4 more times before he gets up to get ready for work, plus YS' alarm goes off and he knocks something off trying to get to it, and MS gets 2 texts.  OY!   Guess it just wasn't meant to be!

I am going to have lunch with a friend today.  We try to get together for lunch when I'm out of school.  Her husband was one of the assistant football coaches for my sons' high school team.  She has a small business on the side and makes things like decorative & planter chairs, bracelets and necklaces, flip-flops, skirts, and clocks made out of antique Tole trays.  To see her creative gifts, go to Facebook and search for "The Peacock". Once you're there, look under photos to see what goodies she has!  She can make things in any colors you want!
Or, you can follow the link that's on my sidebar.  Just look for the peacock: 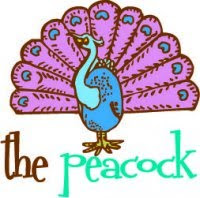 Well, it's time to go to the grocery store today.  I make that visit 2 times/ month, right after pay day.  I sit down with a calendar, and write out what we're going to have for dinner each night.  The purpose: 1) to get the boys to stop asking me what's for supper, and, 2) so I won't spend over my budget on groceries and buy stuff we don't need.  This is a chore that I absolutely don't like to do.  I feel like we have the same thing over and over, and I can't stand trying to find new things to fix.  So, after I write what we're going to have for supper on the calendar, I make out my list.  I actually make 2 lists:  the first list is just looking at each recipe and writing down the ingredients I need, the 2nd list is to put those items in order according to how they are in the grocery store.  I've been going to the same store since we moved here (about 5 1/2 years), so I know the layout pretty well.  One big problem:  I was in the store a couple of  days ago, and an employee let me know that they're moving things around.  WHAT?  I've made out my list according to the old way; surely they haven't changed things around that much.  And, could they not change it because I know it by heart?  They really need to get into Mary's world, for sure.

So now that everybody thinks I'm really, really weird (!):  My coworkers think I'm OCD:  I think I'm organized.  Of course, to look at my house (mainly my desk) you'd never know it.

The last thing on my agenda for today is MS' soccer game.  It's the first "real" game of the season, and it's going to be a tough one.  The school they're playing is a much bigger school, and their scrimmages didn't fair too well.  I don't think this new team has gelled like last year's ...there are a lot of new players on this year's team.  They made it all the way to the state championship game last year, which was the first time a school from our county has even made it to the state tournament.  They've got a long road ahead of them!

There have been a couple of rock slides on major highways this winter.  Yesterday there was another one on Hwy. 129 at the Tn-NC border, also known as "The Tail of the Dragon".  This part of the highway boasts 318 curves in 11 miles, so, of course it is a favorite of motorcyclists and sports car drivers.  As you've guessed, it's also a very dangerous road, especially for bikers who think they are more experienced than they really are.  Here's why rubber-necking is not a good idea:

Tomorrow will be a fun day.


.
Email ThisBlogThis!Share to TwitterShare to FacebookShare to Pinterest
Labels: grocery, spring break, the dragon, The Peacock