Yesterday, YS & I went to a nearby community college for some Pre-St. Patrick's Day Festivities.  They had a band playing some traditional Irish music:  Red-Haired Mary .  They were really good and got us in the spirit!  Then, Tuatha Dea Drum Nation played.  They were good, but quite different from Red-Haired Mary.  We went from listening to traditional music to listening to what appeared to be Irish-gypsy music!  Quite a contrast!  I think to be in that band a tattoo was a requirement.  (Not that there's anything wrong with having a tat!) It was a family affair as well:  the lead guy had his daughter, son-in-law, son, and fiance in the band.  It was kind of bizarre how they had these 2 "dancers" off to the side, dancing (imagine that) to the music.  I'm not real sure what their purpose was.  When they first came out, all I could think was "cult".  They stayed and talked to anyone who wanted to talk, and, just eavesdropping listening, they seemed like nice people.  Here's a picture of Tuatha Dea Drum Nation:

Check out this guy's kilt: 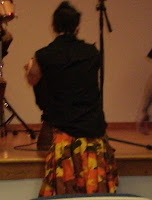 I don't think you can tell, but it was a camouflage pattern in orange and yellow.  This is the leader's son-in-law.

After them, there was a dancing group, The East Tn. Highland Dancers.  I really wanted to stay and watch them, but this was YS' face: 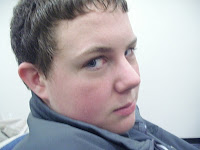 No, he wasn't thrilled, so we didn't stay.  We had a few nice hours together! 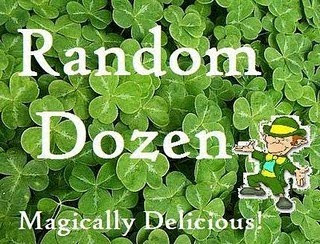 2. Julius Caesar is quoted as saying, "I came, I saw, I conquered." Which circumstance or experience of yours does this saying best describe?
When I had YS.  I'm not going to bore you the details.  I'm just going to say that I delivered a 10 lb. baby boy....naturally.  And that's all that needs to be said about that!

3. If I peeked in on your day like a mischievous little leprechaun, at what time would I most likely find you blogging?
Early morning.  I really need to wait until the afternoon (I get pushed for time some mornings!), but I do my best thinking in the morning!

4. Re springing forward for Daylight Saving Time, is there anything you've ever been really early or really late for?
Shortly after husband & I got married, we were considering moving to Alabama from Georgia.  I had to get my Al. teacher's license before I seriously started looking for a job.  To do that, I had to take a test.  I forgot about the time change, and was about an hour and half early for the test.  When I got there, I wondered why I was the only one there!

5. What are you most looking forward to concerning Spring?
The dogwoods blooming.

6. Shamrocks are the national flower of Ireland and are picked on St. Patrick's Day and worn on the lapel or shoulder. Do you wear green on St. Patty's Day?
Of course.  Everyone should be Irish for a day!  Plus, I'm not real fond of getting pinched.

7. One of Caesar's assassins, Casca, said, "But, for my own part, it was Greek to me," which of course means he didn't understand something. Probably his own lines in the play. Anyway, what is something that is "Greek to you," something incomprehensible or indecipherable?
Numbers.  I don't understand numbers at all.  I can conjugate the heck out of some verbs, but don't give me numbers.  I don't need no stinkin' numbers!

8. Is March behaving more like a lion or a lamb where you live?
Lion:  rain and cold!

9. "An extra yawn one morning in the springtime, an extra snooze one night in the autumn is all that we ask in return for dazzling gifts. We borrow an hour one night in April; we pay it back with golden interest five months later." -Winston Churchill. If you had one extra hour per day every day, what would you do with it?
Oh, gosh!  I would think catch up with stuff I didn't have time to do during a normal day.

10. Legend says that every Leprechaun has a pot of gold hidden deep in the Irish countryside. Aside from real gold or money, what material item would be in your dream pot of gold?
To be honest, I can't really think of anything big.  A laptop would be nice, or  a new bathroom!

11. "The best things are nearest: breath in your nostrils, light in your eyes, flowers at your feet, duties at your hand, the path of God just before you." Robert Louis Stevenson. Look around you right now and tell us about something essential or beautiful very near you that you take for granted every day.
My husband.  I know, that's sad.  He's a wonderful man and a wonderful husband, but, I do tend to take him for granted.

12. Just for a bit o' fun, click here (www.blogthings.com/irishnamegenerator/) and then report your Irish name. Mine is "Zoe O'Sullivan." I love it!
Mine was Maeve Ryan.  Love it...sounds close to Meg Ryan, who is one of my favorites!  Remember when she was Betsy on Guiding Light?
Email ThisBlogThis!Share to TwitterShare to FacebookShare to Pinterest