Before I get to the Random Dozen for the week, I have to share this with y'all:
Yesterday morning I had the news on.  I absolutely love this one meteorologist:  he's young, very good looking, really nice, and wonderful with the kids.  He's been at one of my schools before (one of the 5th grade teachers has him up at least once a year so we can get some "eye candy"!), so yesterday morning I thought, "Next time he comes to school, I'm going to get my picture made with him."  I was in the Principal's Office in the afternoon admiring a picture of her and Pat Summit (the greatest women's basketball coach ever), and I look up, and guess who I saw!!!  I couldn't believe it!  I told the principal that I needed to get a picture of him!  So, she grabbed the camera, and said, "Well, let's go."  I about fell out, y'all!  I told the Meteorologist about my thought that morning.  He was so very nice and acted flattered.  Apparently my face and neck were really, really red.  The secretary said that was the reddest she had ever seen me!  I told them I coincidentally was having a hot flash, but I don't think they bought it.  I had to turn on my air conditioner when I got back to my room!
Okay, so here it is:

Isn't he just adorable?  And, look, he has his right arm around me! Okay, okay (fanning my face!), enough of that!  I'm fairly certain I made a huge, gigantic fool of myself!

So, without further adieu:

1. How old is the oldest pair of shoes in your closet?
I think I have a pair of boots (that I used to wear when we camped a couple of times) that are around 8
years old. 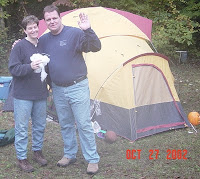 2. Did you buy Girl Scout cookies this year? If so, what variety?
(Again with the red face!) I just bought 4 boxes today.  I have 3 boys + my husband, so I'm allowed, right?

Besides, I was helping out a friend who had to buy $300 worth for her daughter to sell.  She 's a bit of a
procrastinator!  And, why is it that the cookies look so big on the box, but when you open them up,
they're so small?  Oh, back to the question:  Do-si-dos, Trefoils, Tagalongs, Dulce de Leche.  I would've
bought thin mints (they're the best when you pop them in and let them melt in your mouth!), but she didn't
have any of those.
3. Do you know how to ballroom dance? If not, would you like to?
Nope.  I don't think I'm graceful or coordinated enough!

4. Were you a responsible child/teenager?
Mostly, yes.  There were times when I would ditch the babysitting because I just didn't feel like it.

5. How many of this year's Oscar-nominated movies did you see?
When are the Oscars and what are the movies nominated?  (Oh, sorry...I guess I missed them!)

6. If you're going to have a medical procedure done, such as having blood drawn, is it easier for you to watch someone else having the procedure done or have it done yourself?
Having it done myself...then I don't have to watch.

7. What is your favorite day of the week and why?
Sunday...the laundry should be done, so I get to relax!

8. Do you miss anyone right now?
Not at this moment.

9. Do hospitals make you queasy?
Nope.  But, my husband (who was an Army Medic) doesn't like them.  Weird, huh?

10. At which store would you like to max-out your credit card. Not that you ever would, you responsible person, you.
Hmmmm...if we're going sensible, I  would say Target, except for electronics.  Then I'd say WalMart.  If
we're going for non-redneck, I'd say IKEA.  I've never been in one, but I know what's in there!

11. Are you true to the brand names of products/items?
TP and paper towels:  yes.  Everything else: no.  Some of the store  brands (especially with food) are
better than the brand names, and they are cheaper, even if you have coupons.

Okay, that's it for this week!  Jump  over to Random Dozen and join the fun!
Email ThisBlogThis!Share to TwitterShare to FacebookShare to Pinterest
Labels: meteorologist, random dozen