Yesterday, MS' soccer team left for the state tournament.  The place where it's being played is about 3 1/2 hours away.  Here's a picture of the team on the bus, ready to go: 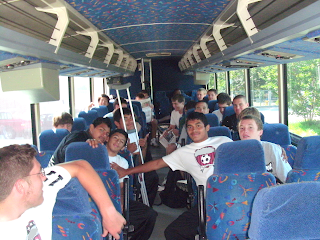 The boys are so funny...when I was taking the picture, some of them yelled "Queso"!  (Bet you can't guess which ones!)  They are quite a group of boys!
Unfortunately, they lost last night 1-0.  I hate that they got the shaft with the "blind draw" and had to play the same team that they played last year.  But, I think they made it farther than a lot of people thought they would, so you've gotta hand it to them!
While I was at the high school, I ran into YS with some of his harem friends(except for the other boy!  The other boy is his friend, not part of his harem!): 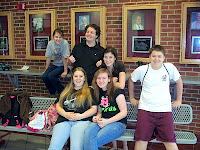 It was his last day of school (they had a half-day), and they had already finished taking their last final as Freshmen.

I've got to show you my find of the week. 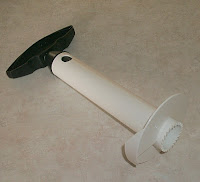 It's a pineapple peeler/slicer.  I love fresh pineapple, but have never gotten the hang of cutting one up without wasting half of the pineapple meat.  I saw this in the grocery store and thought I'd give it a try:

You cut the top off of the pineapple, and start twisting, kind of like you would a corkscrew. 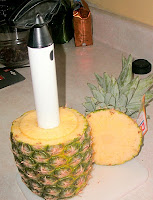 Then, when you get to the bottom of the pineapple, you start pulling it out:

Until it's all the way out: 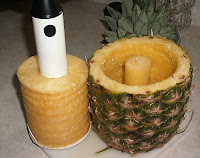 Is that not the coolest thing?  Yes, I'm easily amused!

If you've been reading my posts, you know I don't do well with keeping plants alive.  I've had these for a whole week, and just look at them: 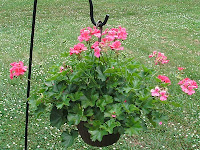 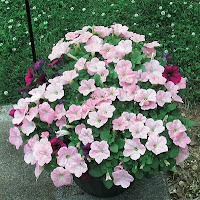 Please over look our clover field yard in the back.  It comes from years and years of it not being tended.  We hate to kill the clover because we're afraid if we do, we'll just have dirt!
Check out my "surprise hosta" in the space between the sidewalk and house: 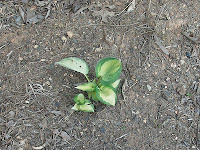 NO WEEDS!  Hopefully I can get the  little guy to grow!  I need to decide what plants I'm going to put in there and get them  in before summer's over.  I think I've decided on some kind of ground cover that blooms.  Any suggestions?

The Air Force Hot Brass Band was so awesome last night!  I could have watched the tuba player All. Night. Long.  I've never seen a tuba player move like that!  They played a lot of  '80's and '70's music (and we all know that's the best music!), and, instead of having  a bass guitar, the tuba was it.  Man, was he good!  I just can't describe how good they were.  Here's an example:
My Country Tis of Thee   (Scroll down until you see the little blue icon near the bottom of the page, then click on the icon.)  Warning:  It's a little loud at the beginning, but just wait for it.  That will give you a good idea of the tuba player:  he  was jamming!