Last night was MS' high school graduation.  It's hard to believe he made it without me killing him or at least hurting him!  (Just joking here...I wouldn't do either to him!)  He is the stereotypical middle child, but he is a complete joy.  He's not afraid to show his emotions:  He can be a "huggy-feely" kind of person, completely in a masculine way.  He's not afraid to tell me he loves me in front of his friends.

I'm going to miss this class.  They welcomed MS in when they were in 7th grade (when we moved from SC) and treated him as if he had been there from the beginning of their school years.  I know in some small schools this isn't the case, and the newcomers are treated as outsiders. 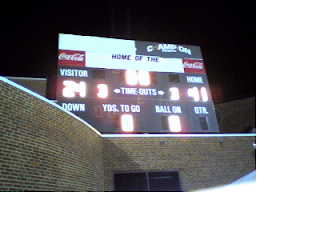 (The scoreboard after the big rivalry game.  It had been 8 years since our high school had beat the other team.  They were supposed to have beat them a couple of times in the past 6 years, but they finally did it!) 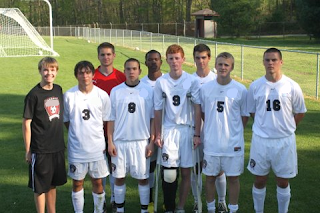 This class is "lively".  So many of them have been in some trouble, but deep down they are all good kids.  Some of the moms on the soccer team were talking, and we decided  they got in trouble because they are immature:  a lot of the kids in the class have birthdays in March & April.  Oh, and they do know how to have fun...a lot of it! 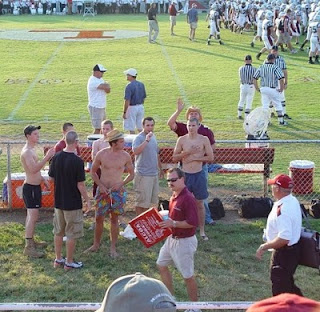 (Some of the senior boys before the game...they would go shirtless-regardless of the weather- and paint some of the players' numbers on the back, and paint a letter of the name of the school on their fronts.  This was their year to do that!  We'll see who carries on the tradition next year!)

This class leaves behind quite a legacy.  There's a classmate who made it all the way to Hollywood during American Idol (he was the center for the football team, and noone understood when he just quit the team a couple of weeks before the 1st game-he couldn't tell anybody what was going on): 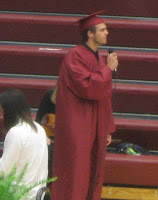 A Gatorade Player of the Year for the state (there's only 1 per state)-this is the same young man who broke the record for the most touchdowns in a season (he had 50) and was invited to walk on at a major university nearby: 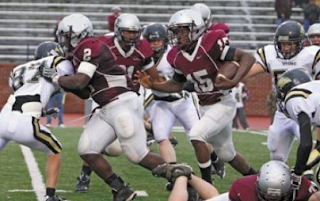 (Photo by Jenifer Clark)
Another classmate who will join another alum on a football team at a Division I university  in a neighboring state: 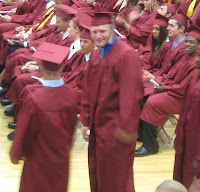 And, there are a couple of boys who will continue their football careers at smaller schools:

(The one on the left is my "son from another mother"!  I absolutely adore the smile that the one on the right has.  Both are such great kids!)
Then there's the classmate who will be going to a major southern university on a "Tech"  scholarship (He did a a lot of the filming of school events)- he's the one on the right: 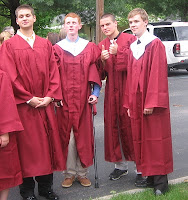 And the classmate that I'm sure has a future as a Contemporary Christian Artist: 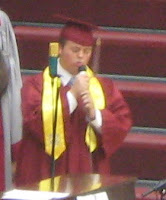 I'm sad to see this class leave.  I'm sad to see them disperse and go their own ways, because the days of them popping by the house will soon be over.  The nights of poker playing in the basement will just be something they'll talk about when they get together at reunions.  The front yard will be quiet with no boys  kicking the soccer ball or throwing the football around. 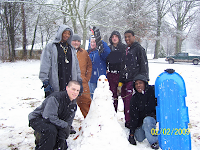 So, I'm just going to enjoy this last summer before they go their own ways.  I love these boys like they're my own.
YS had a part in last night's ceremony:  The band played Pomp & Circumstance (okay, they're not playing here!):

After the ceremony, there were hugs & pictures all around: 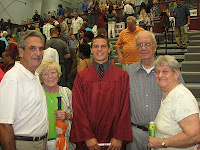 (MS with both sets of grandparents.) 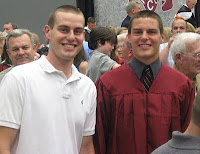 (
(OS & MS...I don't know who the man in back is, but he looks like he's posing as well!  YS was getting the band equipment back in the bandroom.) 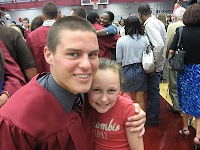 (
(MS and one of his cousins)
And a little get-together at the house (after husband went back up to the school to get YS & OS-we actually forgot about OS....not used to having him around anymore!) 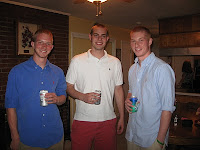 (OS and a couple of cousins)

(The cake...obviously I took off his name and the first letter of his school...privacy reasons!)
I'm expecting great things out of this class:  I know they won't let me down!
Email ThisBlogThis!Share to TwitterShare to FacebookShare to Pinterest
Labels: cousins, family, football, graduation, MS, soccer