Rambling on a Saturday

I put a new ticker above the postings.  Why?  I'm hoping it will help me be accountable for what I'm eating.  In my mind, if I can see that every day, I'll want that person on the other side of the ticker.  I'm visual that way!
About 11 years ago, I lost 50  pounds.  I had an awesome dietitian whom I loved and wanted to make happy.  She taught me what to eat, how much to eat, and when to eat it.  Those pounds just came right off.  Since we moved home, I've gained about 27 pounds back, and it scares me.  It's not healthy, especially when diabetes runs in the family.  Remember my grumpy post about being tired?  That was the beginning of my deciding to take ownership and do something about it.  I considered going to Weight Watchers, but my dietitian gave me the tools to do it on my own:  I didn't want to spend money doing it when I knew exactly what to do.  I had to be accountable for my actions.   I'm thinking 5 pounds so far isn't too shabby, considering that it is the end of the school year, which means eating out.  Mr. Principal offered me a candy bar the other day, and I politely told him no.  He went through what kind he had; after each kind I told him "no".  I finally looked at him and said, "I said I don't want it!"  (I was smiling when I said it, so I wasn't rude!) I did end up taking one and giving it to MS.  That is a major milestone for me.  I have an incredible sweet tooth and have a very hard time turning away sweets.

Question:  When is it our responsibility as an adult & parent  to let a child who is not yours know he has done something inappropriate?
Thursday night at the soccer game, a student yelled out "Ref, you suck!"  (sorry, that's what he said)  His parents weren't there (I've never met his parents, and this is a student who was in the band this year), and I didn't notice any faculty sitting near him. I was sitting about 5 people down from him.  So, I turned, said his name, and told him not to do that and that it wasn't appropriate.  The student told MS after the game that I had "yelled at him."  No, I didn't yell, I just let him know that I didn't appreciate it.  MS said that I shouldn't have done that, but I told him that it was a reflection on the school and the whole community.  This student is also the student that let the f-bomb fly in the pool at band camp...at a Christian college.  This kid can be the most respectful, polite person in the world, but he can also be the most disrespectful, talking-back, "the rules don't apply to me" kind of kid.  I don't trust him one bit.  YS is not allowed to be in the car when he's driving.  In our state, when you first get your driving license, you are only allowed to have 1 other person in the car, unless they are siblings.  There have been a number of times when this kid has broken this law.  This is just one instance of him breaking the rules.  I fully expect a phone call from his parents, but I'm ready. I'm going to tell them that I'm sorry they weren't there to let him know how inappropriate that was...but he probably wouldn't have said it if they had been there (which, like I said...I've never met them).  That's the thing about the community where we live:  you look out after other kids.  I would fully expect another parent to correct my son if he said/did something that was inappropriate.  What's your take on the situation?

Sister Ann Marie at Franciscan Life  was kind enough to give me an award!  Here it is: 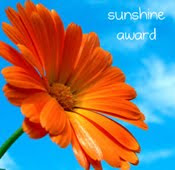 Isn't it beautiful?   Here's what's next:
1. Post the logo on your blog and/or within the post.
2. Pass it on to 12 other bloggers.
3. Add links to these 12 bloggers within your blog.
4. Let them know they are receiving the award.
5. Share the link of the person from whom you received the award.

So, here are the lucky receivers:

Just let me say this:  I work in a very cool elementary school.  Yesterday as the kids were leaving, this was playing on the intercom:

I enjoyed yesterday afternoon with a nap and "trash tv":  The Real Housewives of New Jersey.   Love, love, love to watch and see what's going to happen next with crazy Danielle and hilarious Teresa!  (Don't judge...it was either that or clean the kitchen!)

Y'all have a good weekend!  See you back here on Monday!