It's Gonna Get Crazy

This week is going to be absolutely C-R-A-Z-Y.  District Soccer Play begins tonight:  It's do or die time:  If they lose from here on out, they're done.    They shouldn't have too much of a problem tonight:  they beat the other team by 8 goals the first time they met.  Tomorrow may be a little iffy:  If they play the team I think they will, it may be close.  MS' team only won by 1 goal during the regular season.  If they win tomorrow, I think they'll play again on Thursday for the district championship.  And, if it plays out the way we hope it does, they will be playing either the team that beat them by 2 goals 2 weeks ago, or the team that beat them by 1 last week (those 2 teams tied during their regular season game).

On top of all the soccer going on, I'll be finishing up meetings this week, winding down the school year.  (Only 1 more Monday!)   I'll have one more meeting next week:  The last week of school!

And, to top that off, MS graduates on Friday.  That means a few out of town guests, a house that needs to be cleaned, weeds that need to be killed, a cake, fruit tray, and veggie tray that need to be ordered, and figuring out what else we're going to eat after the ceremony.  I.will.not.get.stressed.  My mom asked if there was anything she could do.  Sure, mom...how about letting us borrow your yard so that the dogs won't be in anybody's way?  Unfortunately, we don't have a fenced in yard so the girls can't be out without supervision.  That's where my parents' yard comes in very convenient!

I hope everybody had a wonderful Mother's Day!  I woke up to this on the kitchen table: 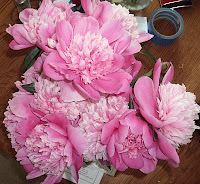 I was also given this card:

Just in case you can't read what it says, here's a close-up:

Yes, I was laughing when I read it!  MS must've taken a lot of time looking for "that special card"! He said that it was stuck in with the Mother's Day cards, and didn't realize it said "Birthday" until he was home.  He keeps us laughing, for sure!  He redeemed himself with this:

I spent a little time down at my mom & dad's house in the afternoon.  My sister, Jeffy, her husband, and my brother (the guitar player)  were there while I was there.  (I've gotta tell y'all something about Jeffy:  she rides a Harley:  not a girlie sportster, either.  I got educated on such things while I was visiting with them this afternoon.)  That's one of the neat things about living in my hometown:  getting to see my parents and siblings without having to think about a 4 hour drive, or getting home at a decent hour to get the boys in bed because they have school the next day.

Anyway, back to me:  we were going to go to dinner at a new place in town that just opened up last week.

We tried to go there on Friday night, but were told there was a 90-140 minute wait.  When we pulled in the parking lot, it looked as full as it did Friday, so we went to Chili's instead.  We only had about a 15 minute wait.  As we were leaving, it was getting pretty packed.  We're really getting uptown now: Here's what opens up today:

It's going to be about a month before we get into eat at that restaurant; betcha!

If my postings aren't as frequent this week (especially at the end of the week), don't lose any sleep over it:  I'll just be really busy!