Look at my ticker right above this post.  Do you realize what it says?  THIS IS THE LAST WEEK OF SCHOOL!  This year has flown by, but I'm ready to get some R&R for a few weeks!

I do have to clarify something that I put in my previous post:  MS pointed out that his class had actually lost 4 games; I forgot that when they were freshman they lost to a team in the nearby Big City.  (I thought that happened the year before.)  I did get the undefeated part right, though!

Here are a couple of interesting items in the news in my area this past week:
1)  A black bear was seen Thursday morning on the campus of a high school in the school system where I work.  Seems the bear went up into a tree on an adjacent property, and the wildlife officer deemed it harmless because it went up and had a snack.  Plus, it wasn't on school property, so it wasn't a threat to the students.  Thursday afternoon (after Sheriff's deputies watched it all day) she climbed down and then climbed into another tree.  They apparently decided to leave her after school, hoping she'd go back into the woods when it got cooler.  Guess she went on her way:  there wasn't anything in the paper about her as a follow-up.

2)  In Sunday's paper, there was an article about a man getting bit by a bear because he got too close to it while trying to take a picture of it.  The paper reported that he got within inches of her.  Seriously?  Are you kidding me?  This guy gets the idiot of the week year award.  I have to tell ya, when we go up to the mountains, go around "Loop Road" and see a bear, everybody has stopped, and some idiots people go traipsing across the field with their cameras to get a picture of it.   People:  When you go to the mountains and you see a bear, watch from a distance.  They are not pets.    They. Are. Wild. Animals.  Wild, not tame: not there for you to walk up to, not in a cage, not at the zoo, and definitely not at a petting zoo.

3) The big city near my small town apparently compiles an annual list of 15 buildings for an endangered historic preservation list.  On the "Fragile 15" (No, I'm going to go through all of them...just a couple that sparked my interest!):
a)  A building on the university campus:  The owner (an architect)  designed it for a childhood friend, who was the heir to Coca Cola.  The building was willed to the university with the stipulation that it was not to be sold or subdivided, and has to be used for certain purposes.  It's been vacant since 1983.  The historic organization offered to put in up to $200,000 to repair the building and keep it from deteriorating further, but the university said no, they would take up private donations instead.  Hmm...wonder how I can get my house on that list?  Wonder if having a bomb shelter in the basement would help?  (I'll have to tell my house story in another post!)
b)  A building (or maybe it's all of the buildings...the story wasn't real specific) that was on an African-American college in the big city:  The building was designed by the students, and built with bricks that the students made on site.  Very cool.
When we went to Copenhagen last summer, it was amazing to see all of these buildings that had been there forever.  I think we, as Americans, should take a clue from them.  They will update the inside of the buildings, leaving the historical integrity of the facade.  Or, they find ways to integrate the old and the modern.  For example:  Here is a building that was used for making torpedoes during WWII; it's now an apartment building:

Okay, maybe that wasn't the best example because that building hadn't been there forever, but you get my point!  My main point is that, in the U.S., our thinking is to tear it down and rebuild it, but in other countries, it is more important to keep the historical aspects of a building and modernize the inside.  Like this apartment building: 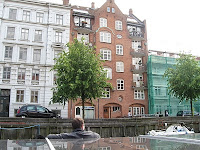 Husband & I went out last night for our anniversary dinner.  It's not until Tuesday (Gee, wonder what Tuesday's post will be about?), but with soccer and the band banquet, we decided to go out then.  We're so cheap:  we used a 2 complimentary dinner coupon I got for Christmas from Ms. Principal!  Can't beat it:  2 starters, 2 entrees, and 2 desserts for free, plus the waiter gets a very large tip!  Winners all around!  Oh, and the food was most excellent!
Hope everyone has an Extraordinary Monday!
Email ThisBlogThis!Share to TwitterShare to FacebookShare to Pinterest
Labels: bears, Copenhagen, food, football, history, mountains, MS, News, restaurants