Friday night YS & I went up to the big city to see the high school jazz band.  The director got them a "gig":  they played for an hour at this place.  They sounded great and got a lot of compliments.  And, I got out of cooking that night.  PERFECT!

Saturday, MS' high school soccer team traveled to a town 1 1/2 hours away for the "make it or break it" game.  Win, and they go to the state tournament for only the 2nd time in school (or county) history.  Lose, and the season is over.  I don't want to say that the refs definitely had who they wanted to win in mind, but I will say that in the first half, I stopped counting the fouls at 10 on us and 2 on them.  In all fairness, there were some missed on both sides, but it did seem that they missed theirs more than ours.  With less than 2 minutes to go in the game, one of our guys scooted around their goalie after he dove for the ball and missed.  SCORE!  The other side was yelling that he was off-sides, but a couple of our parents who are very knowledgeable said he wasn't.  The score stood.  Was he really off-sides?  I have no earthly idea, but it is very possible that the ref overlooked it because it was really hot on that artificial turf, and I'm sure he was ready to go to the house!  One of  their students was told to leave the stadium after he had been yelling inappropriate things.  One of their moms said it was about time.  (See, it is okay to tell a child who is not your own that what he said is inappropriate!)  Apparently this kid had been yelling things all season long, and the line judge called him on it.  Final Score:  1-0.  It was an exciting game!

Next up for the team is a school that they played last year, and beat them 3 times before the refs agreed that they had actually won.  The game went on for 4 hours:  a game usually lasts about 1 1/2 hours.  I have a feeling the other team hasn't forgotten that game, and will be ready for us.  Too bad the team that we played 3 times this season didn't draw them.  Luck of the draw, or....?   Hmmmm!

Sunday was Pentecost Sunday:   the day we celebrate the Holy Spirit descending on the disciples.  This marks the end of the Easter Season in the Catholic Church, so I guess I can take my Easter mailbox cover down!  Here the Apostles and Mary were, in a room, when it became really windy.  I'm sure they thought the building was going to blow down.  Then, they see a white dove, and, once they realize it's the Holy Spirit, they calm down.  Jesus had fulfilled his promise that he would send the Holy Spirit.

It was on that day that Jews from all over had congregated in Jerusalem for Pentecost.  After the Holy Spirit had descended upon the Apostles, bringing them the 7  Gifts of  The Holy Spirit, the Apostles were able to share the gospel with the Jews, in their own language.  Every time I hear this story, it reminds me of Babel:  In Babylon, the people became divided, because all of a sudden, everybody was speaking a different language and no one could understand the other.  But, at Pentecost, the apostles were able to bring the people together by speaking the language of each one.


Pentecost holds special meaning to me:  It was the day that husband was received into the Catholic Church.  Before we moved to SC, he told me that he would never convert.  I'm still convinced that that's why we were sent to SC.  We had a wonderful parish and made many wonderful friends.  Not only did we worship together, but we socialized together.  Then, one day, husband starts talking about converting.  When the big day was near, we told the boys.  Their one question:  Did he have to get up in front of everybody and sing the "Sunflower" song?  'Cause if he did, he'd look pretty funny!  The Sunflower Song ("Like a Sunflower") is a song that all of the First Eucharist participants sang every year.  It really brought tears to our eyes watching the little ones singing and doing hand motions.  I couldn't find a recording of the song in the internet, but here are the lyrics:

Here is what I almost stepped on when I was in the yard yesterday: 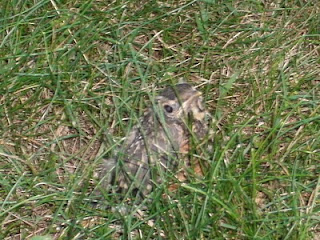 Poor little thing.  Just a little too young to fly.  Husband came out and scooted it, and it ran off into a wooded area in our yard.  I asked him if his momma would come and get him, and he said she couldn't pick it up.  Then I asked him if she would come and feed him, and he just kind of looked at me and said, "sure".  But, somehow I don't think he was telling me the truth.

And, finally, I bought the first melon of the summer.  There is nothing like melons in the summer, even though it's really not summer yet, but we're out of school, so I'm calling it summer! 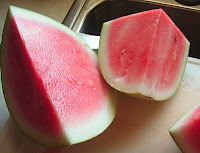 When I was pregnant with YS, all I wanted was melons.  It didn't matter what kind, I just wanted them.  I was 7 months pregnant, and walked into Kroger's produce section.  The produce manager and I talked just about every time I went in...he got to know me very well that summer!  Anyway, he introduced me to crenshaw melons.  (They are kind of like a mix between a honeydew and a cantaloupe.)

And, that summer day when I walked into the Kroger produce, he saw me and told me the truck came in, but there weren't any crenshaws on the truck.  WHAT?  I told him to get on that phone and tell them they have a woman who's 7 months pregnant who wants her crenshaws.  Well, he laughed and put a watermelon in my basket.  And I waddled away.